Astros' Baker accepts that no one is moving on from scandal 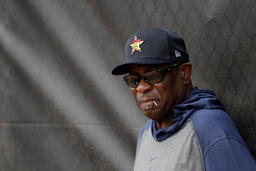 WEST PALM BEACH, Fla. (AP) Houston Astros manager Dusty Baker has gone from hoping aloud that fallout from his new team's sign-stealing scandal would go away quickly to accepting that the back-and-forth is lingering.

"You realize it's going to take a while to move on. You don't just move on, just 'cause you say, 'Move on.' We do realize that sometimes the guys have something to say. Sometimes you guys have a job to do," Baker told reporters Sunday at spring training. "Everything heals in time, and I'm just hoping that the time to heal has come and gone."

Then he added: "Probably not, but I hope so."

This comes 72 hours after Houston's poorly received news conference and attempts to apologize, when Baker said, "We're hoping that we don't have to continue to answer these questions, and hopefully we can get the season started because it has been a distraction."

He said Sunday, he was fine with Astros shortstop Carlos Correa's vociferous defense on Saturday of teammate Jose Altuve and rejoinder to players from other teams - a group that included reigning NL MVP Cody Bellinger of the Los Angeles Dodgers and catcher Kurt Suzuki of the Washington Nationals, who beat Houston in the 2019 World Series.

Suzuki, for one, made clear Sunday he is ready to move on from the whole deal, joking: "Honestly, I'm too old to get in the middle."

"I really don't associate myself with this kind of stuff," said the 36-year-old Suzuki, whose team shares a spring training complex with the Astros. "I just kind of go about my business and try to stay out of everything and get ready to play baseball."

The Nationals have said they got ready for the Fall Classic in October under the assumption the Astros were cheating; a Major League Baseball investigation released last month said Houston used video feeds to steal opposing catchers' signs in 2017 and 2018.

Part of the fallout was that Astros manager AJ Hinch and GM Jeff Luhnow were fired.

"You hear stuff around the league. And all you do is do your due diligence and you try to prepare yourselves to not get into that situation," Suzuki said. "And we just did our homework on our end and did everything we possibly can to combat the rumors that are going around and we just prepared ourselves. That was the bottom line. It was just getting ready for it, if it did happen."

Correa took a jab at Suzuki's assertion to The Washington Post earlier in camp that he heard whistling during the World Series when Houston was batting, and told the catcher, via the media, to "enjoy" his ring and his teammates.

So naturally, Suzuki began a brief session with reporters Sunday by saying, "I'm just enjoying my World Series with my teammates. That's what I'm doing right now. So we're just enjoying ourselves and getting ready for the season."

And then he let a wide smile cross his face.

"Carlos is a grown man and you have to answer for what you say. He believed in what he said and he said what he said," Baker said. "So I didn't have any problem with it and I certainly don't waste my thoughts on it."