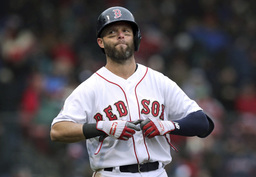 BOSTON (AP) The Boston Red Sox are still hoping to have a manager in place by spring training, but chief baseball officer Chaim Bloom said Thursday it's possible they won't hire someone before pitchers and catchers report Feb. 12.

"It would certainly be ideal" to have replaced Alex Cora by then - but not at the cost of rushing the process, Bloom said. "Nobody wants to be at this point in a year without a manager, obviously, so that would become even more important once we get to spring training."

The Red Sox let Cora go last week after Commissioner Rob Manfred identified him as the ringleader in a sign-stealing scheme when he was the bench coach with the World Series champion Houston Astros in 2017. Major League Baseball is also looking into whether Cora engaged in similar shenanigans after taking over the Red Sox in 2018; the team has declined comment pending the results of the investigation.

The Astros fired manager AJ Hinch, and the Mets fired new manager Carlos Beltran - before he managed a single game for the team - because of his connection to the cheating. The Mets stayed in house and quickly hired Luis Rojas to replace Beltran, and the Astros have already conducted several interviews for their opening.

Bloom declined to comment on whether the Red Sox have interviewed anyone; he also would not say whether the team has ruled out internal candidates.

"It's best for everybody if it just stays private until we have something to share," he said. "Obviously speed is important, because of the unusual timing of this, but we just want to make sure we're not going faster than we should, in order to get the best outcome in this process."

Bloom also said the Red Sox are trying to help second baseman Dustin Pedroia figure out what to do after what the team called a "significant setback" in his recovery from a knee injury.

A four-time All-Star and the 2008 AL MVP, Pedroia has played in just nine games the past two seasons while trying to recover from an injury resulting from a hard slide into second base by Baltimore's Manny Machado on April 21, 2017.

"It's not an easy thing to work through," Bloom said. "If anybody can work through this, it's going to be Dustin. But he's obviously still, with our help, trying to get his arms around what's next."

The Red Sox signed infielder Jose Peraza to a one-year, $2.85 million contract in December, and he could be the answer at second base. Peraza spent the last four years in Cincinnati, batting .273 with 28 homers and 154 RBIs.

Pedroia, 36, could move into a position in the front office or coaching staff.

"He has earned the right to be an influence on this organization and part of the organization for life," Bloom said. "Everybody shares that estimation of him here."