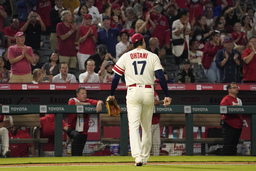 The reigning AL MVP pitched no-hit ball into the eighth inning and extended his hitting streak to 14 games as Los Angeles pushed its winning streak to four with a 4-2 victory over the Oakland Athletics.

"Every time he takes the mound, you can anticipate something special happening," Angels interim manager Phil Nevin said. "He had everything working. When he got through the seventh, I thought it was going to happen. Unfortunately, we'll wait until next time."

Ohtani said through translator Ippei Mizuhara that he was surprised he got through eight innings. The right-hander wasn't happy with his fastball and went with more breaking balls than normal.

"To be honest, the velocity on my fastball wasn't as fast as normal. But my slider was doing its thing and was working. I'm kind of surprised with my stuff today," he said.

Ohtani allowed two hits and struck out 10 in eight scoreless innings to match his longest outing of the season.

In his final home start of the year, Ohtani (15-8) issued a leadoff walk to Tony Kemp before retiring the next 22 batters in order. Conner Capel broke up the no-hit bid with a sharp grounder that deflected off sliding shortstop Livan Soto's glove and into left-center field with two outs in the eighth.

Even if Soto had been able to field it, he would have had trouble throwing out Capel.

Dermis Garcia followed with a clean single to left before Ohtani retired Shea Langeliers on a grounder to third to end the inning.

"It was going to take a special at-bat and Conner stayed on a ball away and put a good swing on it," Oakland manager Mark Kotsay said. "There's always that exhale, and then Garcia gets ahead and we get some momentum."

Ohtani ran his hitting streak to 14 games - the longest current streak in the majors - by going 2 for 4 with an RBI. The Japanese superstar has 26 hits this season in games he also pitched.

Luis Rengifo, Taylor Ward and Max Stassi had solo home runs for the Angels, who have won five of six.

It was Oakland's 100th defeat of the season, marking the first time since 1979 it has reached triple digits in the loss column. Seth Brown had an RBI grounder and Jonah Bride scored on a wild pitch in the ninth to avert the shutout.

"I feel like you guys are more of an expert on the voting. I'll leave it up to you guys," Ohtani said of the MVP race. "I enjoy watching Judge and saw him hit his 61st."

Ohtani is at 161 innings pitched, one inning shy of assuring he will qualify among the league leaders when the season ends. Ohtani is likely to pitch in the season finale at Oakland next Wednesday so he does.

On the mound, Ohtani's 15 victories are tied for third in the AL, his 213 strikeouts are third and 2.35 ERA is fourth. At the plate, he is fourth in the league with 34 home runs and sixth with 94 RBIs.

"I know I got MVP last year but I'm having a better season this year, which is just leading to a lot more confidence," he said.

Ohtani had a perfect game through 5 1/3 innings at Houston on April 20 before Jason Castro lined a single to left field in the sixth. It was Houston's only hit in the game.

The Angels immediately jumped on Cole Irvin (9-13). The first four batters reached, putting Los Angeles up 2-0. Rengifo led off with a homer into the Angels' bullpen in left field, then Mike Trout drove a double to the center-field wall and scored on Ohtani's base hit.

Ward hit a solo shot in third and Stassi went deep in the sixth.

Angels: RHP Archie Bradley (right forearm strain) and OF Mickey Moniak (bruised left hand) were placed on the injured list, ending their seasons. ... INF David Fletcher was activated off the IL after missing 10 games due to a bruised right hand.