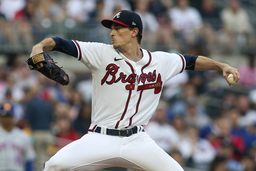 ATLANTA (AP) Max Fried likes where the Atlanta Braves stand during this most recent hot streak - and how they competed against Jacob deGrom the NL East-leading New York Mets.

"I think that's a really good team over there," Fried said. "They play really consistent baseball night in and night out, and we know as a club that if we have a chance to win the division we're going to have to come out and give our best foot forward every night."

Fried outpitched deGrom, ever so slightly, in a matchup of aces and rookie Michael Harris II bounced a go-ahead double in the seventh inning that sent Atlanta over New York 3-2 on Thursday night.

Braves rookie Vaughn Grissom hustled all the way from first base to score on Harris' grounder to shallow center field. In the ninth, Mets star Francisco Lindor was caught in no-man's-land on the bases and thrown out.

The Braves won three of four in the series and moved within 3 1/2 games of the NL East-leading Mets. Atlanta has won nine of 10.

New York had won 17 of 20 before getting cooled off in Atlanta.

DeGrom (2-1) allowed five hits and three runs with no walks and nine strikeouts in 6 2/3 innings.

Grissom beat out an infield single with two outs in the seventh, finishing deGrom and bringing Seth Lugo from the bullpen. Harris followed with a grounder up the middle that split a pair of New York infielders and Grissom, running hard the whole way, beat the throw to the plate with a head-first slide.

"I was thinking this is going to be a close play," Grissom said. "But it was just exciting to be in that position and for Mike to hit that ball and for me to score was a huge moment in the game where we just needed a run."

Kenley Jansen avoided major trouble to earn his 27th save in 31 chances.

Lindor singled to begin the ninth and was trying to steal as Pete Alonso hit a blooper to right-center field. Lindor had already slid head-first into second when he saw the ball and, thinking it would be caught, retreated in a hurry back to first.

But the ball dropped among three fielders and Lindor, most of the way back, could only watch as right fielder Ronald Acuna Jr. picked it up and tossed to second for an easy forceout.

Jansen struck out Daniel Vogelbach, and pinch-runner Deven Marrero stole second with Jeff McNeil batting. McNeil grounded out to Jansen to end it.

The Mets made it 2-all in the fifth when Mark Canha hit his eighth homer, a two-run drive. Canha, who doubled twice in Wednesday's 9-7 win, snapped Fried's streak of 69 1/3 innings without allowing a homer, the longest stretch in the majors. Fried gave up his previous homer June 9 against Pittsburgh.

Fried, who came off the injured list after missing the last nine games with a concussion, allowed his first hit when Canha doubled to begin the third. Canha advanced to third on rookie Brett Baty's single with no out, but Fried escaped the jam with a pair of strikeouts and a groundout.

"I wasn't really sure what to expect, being off longer than normal, but when you're going up against a guy like Jake deGrom you bring everything you've got," Fried said. "I felt pretty sharp."

DeGrom, in his fourth start since injuries made him miss nearly 13 months, gave up a two-out single to Austin Riley in the first and a one-out single to Robbie Grossman in the third. Dansby Swanson doubled home Grossman for a 1-0 lead. Riley then drove in Swanson with a single.

DeGrom retired his next 12 batters before Grissom reached in the seventh.

"I felt like in the first it was pretty good, and then it comes down to two pitches to Dansby, just a bad slider over the middle and then the one to Riley," deGrom said. "Those are two mistakes I wished I had back, but they capitalized on it and it was frustrating but it is what it is."

Since becoming a full-time starter in 2019, Fried has 49 wins, second-most in the majors to the Yankees' Gerrit Cole with 52 over that span. The lefty improved to 6-5 with a 2.84 ERA in 15 career starts and five relief appearances against the Mets.

"Definitely disappointing," deGrom said. "Wanted to come in here and win all four games. Once they won a couple, the goal was for the split. And we weren't able to get it."

Mets RHP Taijuan Walker (back spasms) played catch and will pitch Sunday if he feels fully healthy. ... Braves 2B Ozzie Albies (broken foot) ran in the field but still has no timetable for his return.