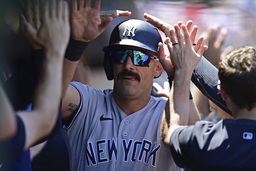 CLEVELAND (AP) Matt Carpenter's days as a major leaguer were dwindling. A few subtle tweaks to his swing brought him back.

So did playing for the Yankees.

Carpenter homered twice and drove in four runs and Gerrit Cole brushed off giving up back-to-back home runs, leading New York to a 13-4 romp over the Cleveland Guardians in the first game of a split doubleheader on Saturday.

A three-time All-Star in St. Louis, the 36-year-old Carpenter signed with New York in May after being released as a minor league player by the Texas Rangers.

All he's done in a reserve role is hit eight homers in 41 at-bats - he had just seven combined homers the past two seasons - and come through every time manager Aaron Boone has called on him.

Carpenter said the chance to play for baseball's most storied team has lifted him.

"I feel like a little kid every time I put the uniform on," he said. "The franchise that is just iconic, and I'm just grateful to be able to put it on every day and go out and play, and when I get my opportunities just try to make the most of them."

Cole (7-2) was tagged for consecutive homers in the second inning by Josh Naylor and Franmil Reyes before settling in. The right-hander allowed Cleveland just one other hit and struck out six.

DJ LeMahieu added a solo shot off rookie Kirk McCarty (0-2) and Jose Trevino homered off Guardians utilityman Ernie Clement in the ninth for the Yankees, who lead the majors with 131 homers.

New York also improved to 16-5 after a loss. The Yankees were beaten by Houston 2-1 on Thursday night.

"There's a lot of toughness and grit in this clubhouse," Carpenter said. "There's a lot of fight. Guys that care. It's easy when you have the talent we have to win games, but to do it in the way we've been able to do it, that's a great stat.

"Guys are able to turn the page and show up the next day ready to go. A lot of good players, and a lot of guys who get after it and do the right things."

Another humdrum win for the Yankees did have a hiccup. Reliever Aroldis Chapman's first major league outing May 22 didn't go well.

The left-hander, who was activated Friday after being sidelined with Achilles tendinitis, came in for Cole to start the seventh and walked three straight batters before being pulled by Boone after 19 pitches.

"He's healthy," Boone said. "He's got to get out there and not think in terms of throwing the ball but just trusting it and letting it rip and let the results fall where they may. I think he's just guarding against making sure he doesn't throw a ball.

"We've just got to get him over the hump."

This is the sixth doubleheader for the rain-soaked Guardians, and what will be their third twinbill in less than a week with another scheduled for July 4 in Detroit. Cleveland split two with Minnesota on Tuesday.

LeMahieu triggered New York's four-run third with his eighth homer, a shot into the right-field seats.

McCarty then got himself into trouble with a pair of walks before Miguel Andujar, recalled as the 27th man for the doubleheader, delivered an RBI single and Aaron Hicks drove in two with a base hit to make it 4-2.

"Innings like the third, you hate when they happen, but they happen," McCarty said. "LeMahieu hit one hard and the other guys just found holes. Mix in a couple walks there, and that leads to four runs.

"They're a good lineup top to bottom. They hit mistakes. They're a professional lineup."

Boone enjoyed watching two members of the team's staff put on Aaron Judge and Anthony Rizzo's uniforms and perform headfirst slides across the infield tarp after Friday's game was called.

"It gained steam pretty quickly and then it turned into a fun team event," said Boone, who didn't know the payout for the joke.

Yankees: Boone said RHP Ron Marinaccio, who relieved Chapman, was being checked after complaining of a "little dead arm." He hasn't allowed a run and just one hit in 13 consecutive appearances.

Guardians: Rookie OF Oscar Gonzalez was placed on the injured list with an intercostal (rib) strain. He didn't report any issues until Thursday and an MRI revealed the strain. Gonzalez will be shut down for at leas one week. ... RHP James Karinchak (shoulder strain) was activated from the 60-day IL and optioned to Triple-A Columbus. The Guardians were encouraged by two recent outings want him to be consistent.

Aaron Civale (2-4, 7.20 ERA) was scheduled to start Friday and the Guardians gave him the option of pitching either game. The right-hander was tagged for six runs in three innings against the Yankees on April 24. He'll face New York's Nestor Cortes (6-3, 2.51).