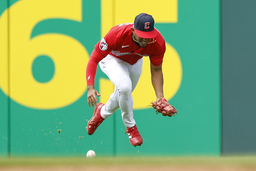 CLEVELAND (AP) Tyler Naquin wasn't aware there was an award given to the most outstanding player in the Ohio Cup until it was handed to him.

"I'll take all the trophies I can get," he said, smiling.

Naquin homered in the fifth inning, scored on Kyle Farmer's go-ahead single in the eighth and led Cincinnati to a 4-2 win over the Cleveland Guardians on Thursday, the Reds' first series sweep of their northern neighbors since 2014.

The Reds won both games in the rain-extended interleague set, and are showing positive signs after starting the season 3-21. They're 8-5 since May 5, and split the season series with Cleveland.

Naquin tore up his former team, batting .533 (8 of 15) with three homers, four RBIs and seven runs in the four games.

For his efforts, Naquin, who was drafted by Cleveland in 2012 and was a key contributor from 2016 to 2020, was presented with the Frank Robinson Most Outstanding Award as the series' top player.

"I didn't even know that was a thing until they brought it in here, " he said. That's cool."

Naquin, who has found his groove since dropping in the Reds' lineup, is batting .419 (13 for 31) with two doubles, five homers and six RBIs in eight games against the Guardians.

"Yeah, a little bit," he said with a wink when asked if it's satisfying to swing well against his former team. "I've got a lot of good relationships over there."

Cincinnati snapped a 1-1 tie by scoring three runs in the eighth off Trevor Stephan (2-1), who gave up three straight singles to start the inning and threw wildly to first for an error after fielding a bunt.

Luis Cessa (2-0) replaced effective Reds starter Tyler Mahle in the seventh and got the win. Tony Santillan worked 1 2/3 innings for his second save.

The Guardians got within 4-2 in the eighth, when Jose Ramirez hobbled back into the batter's box after fouling a pitch from rookie Alexis Diaz off his right shin, and hit an RBI single. But Santillan came on and got Owen Miller to ground into an inning-ending double play.

"That's the key to the game right there," Reds manager David Bell said.

Cleveland starter Cal Quantrill pitched seven strong innings, but remained winless despite another solid outing by the right-hander. He allowed just one run and five hits, walked none and struck out five.

Quantrill has quietly been one of the AL's best pitchers since last June, when he moved into Cleveland's rotation. Over his previous 26 games, the right-hander had a 3.05 ERA, the league's fifth lowest.

Naquin, tied it 1-1 in the fifth with his fourth homer. He jumped on Quantrill's first pitch, driving it over the wall in left-center for his second homer in the series.

"Actually, it was a pretty good changeup," Quantrill said. "Or at least an 0-0 changeup. Just a good piece of hitting. I'd probably throw it again."

Ramirez will undergo X-rays on his shin. The All-Star third baseman writhed on the ground for several minutes after smashing it.

"Hit above his pad, just below his knee," manager Terry Francona said. "For him to react like that, he's a pretty tough kid. He's going to get some X-rays, but he's sore."

Francona was back running the team after testing positive for COVID-19 and missing four games. Cleveland's base coaches, Sandy Alomar and Mike Sarbaugh, are still sidelined.

Francona, however, will miss Friday's series opener against Detroit to have a minor surgical procedure. He's expected to return Saturday.

First baseman Joey Votto will finally rejoin the Reds for this weekend's series in Toronto after missing 16 games following a positive COVID-19 diagnosis. He's been out since May 3.

A Toronto native, Votto said he dealt with symptoms for more than a week after getting the virus.

Before going out, Votto was batting just .122 with one extra-base hit in 22 games.

Guardians: 1B Josh Naylor is expected to return Friday after testing positive with COVID.

Guardians: Continue their homestand against Detroit. RHP Aaron Civale (1-3, 9.85) carries a 6-0 career record against the Tigers into the series opener against LHP Tanik Skubal (3-2, 2.50).