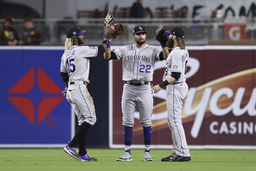 It was the third time the 22-year-old Tatis left a game this year due to a left shoulder injury. He was the NL's starting shortstop in the All-Star Game.

Padres manager Jayce Tingler said the injury is similar to the two times Tatis hurt his shoulder earlier this season and that the team will know more Saturday.

"I don't know how to compare them. They've all been a little bit different," Tingler said. "We're of the understanding that this was a possibility, the shoulder coming out and then back in. The good thing is it slid back in. It's so tough to predict, especially without a lot of information at this point. I will say, for whatever reason, he's had a phenomenal ability of getting back in there, honestly sooner than we've expected. But again, it's tough to say without having a lot of information."

Tatis singled and advanced on Machado's sharp grounder to third baseman McMahon, who came up with the ball but then had it pop out of his glove and roll behind him into short left-field. Tatis made a dash for third but shortstop Rodgers ran toward third, took the throw from McMahon and tagged out the sliding Tatis.

Tatis slid awkwardly over the bag and crumbled in pain a few feet away, bringing a hush over Petco Park. Padres Manager Jayce Tingler and a trainer helped Tatis off the field as he winced in pain, holding his left arm. The trainer was holding Tatis' upper arm/shoulder.

"It looked painful ... I'm sure the Padres are crossing their fingers that this isn't a long-term thing," Rockies manager Bud Black said. "That's a blow to baseball. He is one of the best players in the game."

Tatis suffered a partially dislocated left shoulder on a violent swing April 5 against San Francisco and went on the injured list. He reinjured the shoulder and left a game against Cincinnati on June 19, although he missed only one game. Tatis left a spring training game after hurting the shoulder while making a throw but was back two days later.

Tatis is known for making spectacular plays at shortstop although he currently leads the majors with 20 errors. He became the first Padres player voted to start an All-Star Game since Tony Gwynn in 1999.

Gray (7-6) earned the win with a strong performance, allowing only two runs on four hits in seven innings while striking out four.

"I thought overall Jon pitched well. He pitched aggressive all night," Black said. "He was in a good spot today mentally and physically."

Gray's only blemish was a two-run homer by Manny Machado in the sixth.

"It was a strike but I got too much of the plate," Gray said. "He is a good hitter and he is going to hit mistakes like that. I tip my hat to him."

Machado hit another two-run homer in the eighth inning off reliever Tyler Kinley and finished 3 for 4.

Colorado pounded rookie lefty Ryan Weathers (4-3), who surrendered eight runs and eight hits in four innings. Weathers gave up McMahon's grand slam in the first as well as two-run homers by Connor Joe and Brendan Rodgers, both in the fourth inning.

"After getting shutout the night before we came out swinging it," Rodgers said. "Mac had a huge grand slam. We got an early lead and we just kept the momentum going."

Colorado's Elias Diaz hit a solo shot off reliever Nabil Crismatt in the fifth inning to give Colorado a 9-0 lead.

"Diaz has been in a good spot the last month. Our guys were swinging the bats well tonight," Black said. "McMahon had a good at bat. He squared it up. It's been a while for Mac so that was good to see."