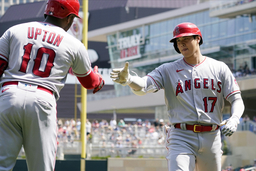 Ohtani, who had two hits, lasered a line drive into the right-field seats for a solo homer in the sixth inning that broke a 2-all tie. The Angels overcame an early two-run deficit to take three of four games in the series.

Ohtani had four hits in his previous 17 at bats.

Max Stassi had three hits and drove in three runs for the Angels.

Max Kepler and Brent Rooker led off with back-to-back home runs for the Twins, now a season-worst 16 games under .500.

Jaime Barria (1-0), recalled from Triple-A Salt Lake for his first start of the season, quickly put the rocky beginning behind him, allowing just two more hits in his

"He had the start the way he did, and I could sense or feel that he was starting to settle down. When we started seeing 94, 95, that's territory I have not seen with him in the past," Maddon said.

Through an interpreter, Barria credited the minor league staff for helping him work on the mental side of the game and staying focused

"Day by day, just trying to go out there and attack," Barria said.

Stassi hit his first career triple in the second, homered in the fifth and singled as part of a three-run ninth. He is the fourth Angels catcher to have a home run and a triple in the same game, and first since Mike Napoli on Sept. 19, 2008.

"We probably lost a little focus as the game went on in the middle innings and didn't have the kinds of at-bats that we aspire to," Twins manager Rocco Baldelli said. ". It started well, but you're not going to usually win too many games hitting solo home runs."

Angels: Out since mid-May with a right calf strain, OF Mike Trout is scheduled for a "routine follow-up" doctor visit Monday. Maddon said Trout "feels it a little bit in that area when he tries to move quickly. . It's not awful." . To make room for Barria, LHP Alex Claudio was designated for assignment.

Angels: Ohtani (4-1, 3.21) will be pitching with an extra day of rest Monday when Los Angeles opens a three-game home series against Colorado. RHP German Marquez (8-7, 3.50) is to start for the Rockies.