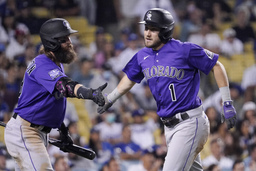 Charlie Blackmon added a two-run homer in the 10th to help the Rockies top Los Angeles for just the third time in 11 games this season. Colorado won for the first time in four games at Dodger Stadium.

Pinch-hitter Sam Hilliard's solo home run in the ninth off Darien Nunez gave Colorado its first lead of the game at 6-5.

"That was a very back and forth game as far as momentum goes, but I'm really, really proud of the guys," Blackmon said. "There were lots of opportunities for us to shut it down, you know, not fight like we did, lots of times where statistically it didn't look good for us, but we battled back and earned a win."

The Dodgers tied it at 6 in the bottom of the ninth on a bases-loaded walk to Justin Turner with no outs. Daniel Bard (5-5) recovered and escaped the jam by striking out Will Smith, Sheldon Neuse and AJ Pollock in succession.

Lucas Gilbreath pitched a scoreless 10th inning for his first career save. The Dodgers fell to 1-10 in extra-inning games.

"We have to find ways as an offense to keep adding on and extending the lead," Turner said. "We have to do the little things defensively and take care of the baseball to protect the lead. Obviously, we haven't done a very good job of it."

Dodgers closer Kenley Jansen has blown each of his last three save opportunities, including two consecutive on Wednesday and Thursday against the San Francisco Giants.

Brusdar Graterol and Nunez were recalled from Triple-A Oklahoma City before Friday's game. Graterol was charged with two runs in the eighth before Nunez gave up Hilliard's homer. Jansen was given the night off.

The Rockies' three runs in the 10th inning came against James Sherfy (2-1).

Hilliard's home run into the Rockies bullpen in right field was his third of the season and the third pinch-hit homer of his career. It came after Blackmon had an RBI double off Graterol in the eighth to get Colorado within a run and Ryan McMahon had a tying single off Nunez.

Elias Diaz also hit a home run for the Rockies, his eighth.

"We feel like we can come in and compete and beat these guys," acting manager Mike Redmond said. "And we know we haven't had a ton of success (against the Dodgers) the last few years but that that can change. And hopefully, as we win some of these tight games, we'll be able to keep the streak going."

Turner added a home run for the Dodgers, while Cody Bellinger ended an 0-for-25 drought with an RBI double in the first. Bellinger left the game in the eighth inning with tightness in his left hamstring and is not expected to play Saturday.

David Price went a season-high 5 2/3 innings on 74 pitches, while giving up three runs on four hits as the Dodgers lefty continued to build into a starting role after starting the season in the bullpen.

"A loss is a loss but to lose them late is obviously tough," Dodgers manager Dave Roberts said. "With what we had, we still had a chance to win the game until that 10th inning when it got away from us. Guys have to step up and get outs. It started with David, who I thought did a great job, and some guys came in and didn't get that first hitter, which is important."

Rockies: RHP Peter Lambert pitched in a simulated game at Dodger Stadium. He had Tommy John surgery last year. . The Rockies are moving closer to resolution with their COVID-19 issues, as RHPs Jhoulys Chacin and Antonio Senzatela headed to Arizona to begin baseball activities. RHP Yency Almonte and OF Yonathan Daza are expected to arrive in Arizona soon. Manager Bud Black was away from the team for the last six games, while first base coach Ron Gideon is back with the team.

Dodgers: RF Mookie Betts, who has not started in any of the past six games, had additional "imaging" done on his injured right hip, with nothing out of the ordinary revealed. Betts is expected to miss the weekend series with a goal of returning Monday for the start of a series at San Francisco. . INF Max Muncy went on paternity leave and returned home to Phoenix for the birth of his first child. He will miss the series against the Rockies. . SS Corey Seager, out since May 15 with a broken right hand, went through pregame agility drills but there was no update on his status.

The Rockies will send left-hander Kyle Freeland (1-4, 5.36 ERA) to the mound Saturday, while the Dodgers will counter with right-hander Tony Gonsolin (1-1, 2.83).