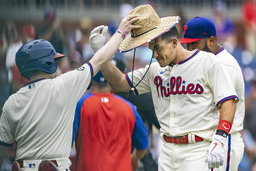 PHILADELPHIA (AP) J.T. Realmuto's two-run homer in the bottom of the 10th inning gave the Philadelphia Phillies a 4-2 win over the Miami Marlins on Sunday in a completion of a suspended game.

Saturday night's game was suspended just two pitches into the top of the 10th inning when severe thunderstorms rolled through the Philadelphia region and causing the second rain delay of the evening.

In the bottom of the 10th inning, Travis Jankowski started at second base and advanced to third on Jean Segura's bunt. With the Marlins playing a five-man infield with one out, Realmuto powered an 0-2 fastball from Miami's Yimi Garcia to the opposite field for his second career walk-off homer.

Jose Alvarado pitched a scoreless top of the 10th for Philadelphia on Sunday, stranding Miami's runner at second base.

The game went to extra innings because of Jesus Aguilar's two-run homer off Phillies closer Ranger Suarez in the top of the ninth.

The regularly scheduled game is scheduled to begin close to 2 p.m. with the Phillies sending top starter Zack Wheeler to the mound against Miami's Braxton Garrett. Garrett is replacing the injured Pablo Lopez.