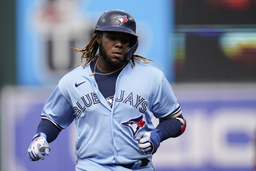 Marcus Semien homered twice for Toronto, which scored six runs with two outs in the ninth off relievers Paul Fry and Tyler Wells to stun the Orioles.

"Wins like this could get a team going, for sure," Blue Jays manager Charlie Montoyo said.

Ryan Mountcastle recorded his first career three-homer game and Cedric Mullins had his second consecutive multihomer game for Baltimore, which hit six homers in a game for the first time since doing so against Houston on Aug. 18, 2016.

Toronto starter Alek Manoah was ejected for hitting Maikel Franco after surrendering back-to-back blasts in the fourth inning and instigating a benches-clearing incident in which no punches were thrown.

Staked to a 7-4 lead to start the ninth, Fry (0-2) allowed two walks and two hits while recording two outs. Wells entered with the bases loaded and a 7-5 lead, but Bo Bichette blooped a two-run single to right to tie it.

"Sometimes you need some luck, and he put it in the perfect spot," Semien said.

Guerrero then laced a double into the left-center gap to give the Blue Jays a 9-7 lead, and he scored on Randal Grichuk's ensuing double.

"Give Bichette credit for an amazing at-bat," Baltimore manager Brandon Hyde said. "He put the ball in play on a tough slider down and away after a bunch of foul balls, just out of our reach. It seemed it took a little bit of air out of the balloon for Wellsy. He hung a couple of pitches after that. It was a tough inning."

Manoah gave up a two-run shot to Mountcastle and a solo homer to DJ Stewart in the fourth to give Baltimore a 5-2 lead. He then plunked Franco on the first pitch, prompting the benches and bullpens to empty. Once the situation cooled down, the umpires conferred and ejected Manoah.

Manoah said he threw several sliders to Franco in an earlier at bat and shook off a sign for another, opting instead for a fastball. He said he was told by the umpires his ejection stemmed from "bad timing."

"I tried to get that fastball in and it slipped away," Manoah said. "I was confused by his reaction. I was questioning `What's going on? What's wrong?' Those were my hand gestures as I was walking toward him. I didn't understand the frustration there."

Baltimore starter Dean Kremer yielded solo shots to Semien and Guerrero in the first but no other damage over six innings, striking out six.

Mountcastle, who also had solo blasts in the second and sixth, is the first Oriole with three homers in a game since Pedro Severino did it at Texas on June 4, 2019. He became the second Orioles rookie with a three-homer game - Nick Markakis was the first, doing so Aug. 22, 2006, against Minnesota.

"Today I was seeing the ball well," said Mountcastle, who matched a career high with four hits. "I was on everything. Obviously, it didn't end the way we wanted it to, so I'm going to keep moving forward."

Mullins had solo shots in the third and the seventh a day after going deep twice in the series opener against the Blue Jays.

Blue Jays: OF Lourdes Gurriel Jr. pinch hit in the seventh inning and remained in the game to play left a day after exiting for a pinch hitter in the ninth inning with a back injury.

Orioles: Hyde said he anticipates LHP John Means (shoulder strain) returning "right around" the All-Star break. Means, who left his June 5 start in the first inning and landed on the injured list the next day, has started to play catch.

Toronto acquired RHP Jacob Barnes from the New York Mets for minor league RHP Troy Miller. Barnes was 1-1 with a 6.27 ERA and two saves in 19 appearances for New York before he was designated for assignment Monday. Montoyo said Barnes would likely join the Blue Jays on Tuesday in Miami.