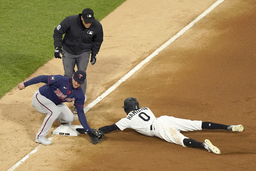 Jose Abreu drove in three runs and Billy Hamilton matched his career high with four hits and also scored three times. The White Sox have won six of seven, boosting the best record in the majors to 21-13.

Nelson Cruz hit his ninth homer for the Twins, who have dropped three straight and seven of eight. Josh Donaldson drove in three runs.

Dallas Keuchel (2-1) won for the first time since April 18. He retired nine straight after giving up three runs in the first three innings, including Cruz's homer in the first. He left after 5 2/3 innings, surrendering eight hits and six earned runs while striking out just one.

"We had a lot of things going on tonight that were great," Keuchel said. "I just wish I could've pitched a little longer."

J.A. Happ (2-1) was tagged for nine runs in 3 1/3 innings, including Vaughn's two-run homer in the fourth. Grandal went deep in the fifth off reliever Shaun Anderson.

"Normally he's pretty good at keeping the damage to a minimum," manager Rocco Baldelli said of his starter. "We weren't able to do that today."

Abreu drove in a run with his first triple since 2019 and Yermin Mercedes followed him with an RBI single in the first to give Chicago the lead for good. Vaughn's solo homer started the scoring in a five-run fifth and Abreu ended it with a two-run single.

Hamilton tripled and doubled in his third career four-hit game and also stole a base.

Chicago has outscored its opponents by a majors-best 72 runs this season and has scored at least nine runs in each of its last four games.

Abreu recorded his 700th career RBI with his first-inning triple but drew the loudest roars from the home crowd for a pair of plays at first base. The AL MVP barrel-rolled onto his stomach in the fifth to stop an Andrelton Simmons grounder before throwing him out, then hustled into shallow right field an inning later to make an over-the-shoulder catch of Miguel Sano's popup.

"It's a pleasure to watch him play," manager Tony La Russa said. "He sets that example; that's why the fellas follow him."

Twins: LHP Devin Smeltzer (elbow inflammation) was placed on the 10-day injured list before the game. Anderson was recalled from Triple-A St. Paul to take his spot. . INF/OF Alex Kirilloff (sprained right wrist) is scheduled to begin hitting in a batting cage Friday. He's been on the injured list since May 5.

White Sox: LHP Carlos Rodon's next start has been moved to Saturday due to back and hamstring tightness, LaRussa said. Rodon (5-0, 0.58), who no-hit Cleveland on April 14, will be replaced Thursday by Lance Lynn.