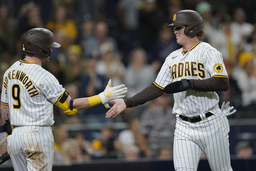 One night after clinching a wild card, the Padres remained a game ahead of the Phillies for the No. 5 seed in the National League playoffs. Philadelphia secured its first postseason berth in 11 years with a 3-0 win at Houston.

If the Padres and Phillies finish with identical records, Philadelphia holds the season-series tiebreaker and would get the No. 5 seed.

San Diego went 4-3 against Atlanta this season, 4-2 against the Mets and 2-4 versus the Cardinals.

Musgrove gave up only two hits and struck out seven.

"You want that last start to be good going into the postseason, so it was really good for him," Padres manager Bob Melvin said. "He had really good command of the breaking ball. Good changeup today, good fastball when he needed it."

The veteran right-hander ended the regular season 10-7 with a 2.93 ERA.

"I was really focused on finishing the season strong and trying to still make some improvements on things I wanted to work on," Musgrove said. "It was my first time getting under a 3.00 ERA. ... I really wanted to try and get under 3.00, personally with the ERA."

Adrian Morejon (5-1) worked two scoreless innings in relief and Josh Hader got two outs for his 36th save, halting a four-run Giants rally in the ninth.

With the bases loaded, Hader retired J.D. Davis on a fly to right to end it.

"We were going to use Josh either today or tomorrow and that would be it for him (for the regular season)," Melvin said. "We got him in there and he will have some days off before postseason starts."

San Diego broke a scoreless tie on back-to-back doubles by Trent Grisham and Brandon Dixon in the eighth. Later in the inning, Josh Bell walked with the bases loaded to force in a run, and Jake Cronenworth hit a two-run double. Myers launched a three-run homer to center field, making it 7-0.

"The bats showed up, which was really good," Myers said. "I did not look at the scoreboard for the first time in about two weeks, so that was good."

Shelby Miller (0-1) allowed five runs in 1 1/3 innings. Sean Hjelle had an impressive outing in relief for the Giants, pitching five scoreless innings while striking out eight.

Brandon Crawford and Joey Bart each had a two-run single in the ninth for San Francisco (80-80), which had won 11 of 13.

Melvin wasn't ready to announce his rotation for the wild-card series.

"It's pretty easy to forecast what those three are going to look like but I'm reluctant to say that right now," he explained.

It's almost certain San Diego will start Yu Darvish in the opener, followed by lefty Blake Snell and then Musgrove if there's a decisive Game 3. Darvish was selected the NL pitcher of the month for September after going 5-1 with a 1.85 ERA and 44 strikeouts.

Padres: 3B Manny Machado, C Austin Nola and LF Jurickson Profar were rested a night after the Padres secured a wild card. The team had a wild clubhouse celebration after its clinching win. "We're very aware that we have some games to play right now. It's not going to go on all night," Melvin said about the party Sunday evening. "It was a good thing it was a day game as well."