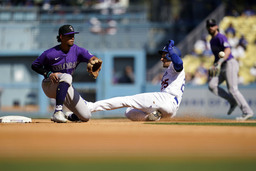 LOS ANGELES (AP) German Marquez gave up one hit over six innings to help the Colorado Rockies end a seven-game losing streak with a 4-1 victory over the Los Angeles Dodgers on Sunday.

Brendan Rodgers hit a home run for the Rockies, who were victorious for just the second time since Sept. 19.

Trayce Thompson had two of the three hits for the Dodgers, who missed out on becoming the first National League team to at least 111 victories since the Chicago Cubs in 1906. The Dodgers wrapped up the best record in the major leagues and home field throughout the playoffs with a victory over the Rockies on Friday.

Dodgers starter Tyler Anderson, who is expected to assume the No. 3 spot in the rotation when the playoffs begin, tied a career high with 10 strikeouts in five innings.

The Rockies jumped out to a 1-0 lead two batters into the first inning when Rodgers knocked one deep to center field for his 12th homer of the season. Colorado made it a 2-0 in the third inning, with Yonathan Daza singling with one out and scoring from first base on a two-out double from Ryan McMahon.

The Dodgers didn't manage their first hit and run until the bottom of the third. Gavin Lux walked and Thompson followed with a single to put runners on the corners. A Cody Bellinger sacrifice fly that just missed being a three-run home run scored Lux.

Marquez (9-14) gave up three walks and struck out eight in ending his three-start losing streak. He entered 0-3 in four starts against the Dodgers this season.

The Dodgers' second hit came off Daniel Bard - an infield single from Thompson to lead off the eighth inning. Bellinger reached base on an error by Colorado first baseman Michael Toglia. But escaped the jam by striking out Trea Turner, Freddie Freeman and Will Smith.

Bard also pitched the ninth for his 33rd save.

Dodgers: RHP Michael Grove was placed on the injured list with a left knee contusion after he was hit by a C.J. Cron line drive Saturday, and was replaced on the roster by Jackson. . 3B Justin Turner (shin) returned to the lineup after last playing Tuesday. . OF Chris Taylor missed his second-consecutive game with a neck strain and is considered day-to-day.

Dodgers: RHP Tony Gonsolin (16-1, 2.10) is expected to return from the IL after recovering from a forearm strain.