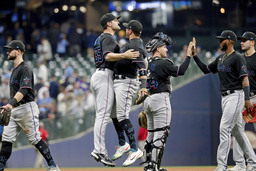 MILWAUKEE (AP) Devin Williams blew a ninth-inning lead and the Milwaukee Brewers squandered a great opportunity to pull even in the race for the final National League playoff spot, losing to the Miami Marlins 4-3 on Saturday night.

Bryan De La Cruz hit a two-run single off Williams that put Miami ahead in the ninth. Milwaukee (84-74) fell a game behind the Phillies (85-73), who split a doubleheader with Washington, for the third NL wild-card berth.

Philadelphia holds the head-to-head tiebreaker between the teams. Both clubs have four games left.

Williams (6-4) walked two in the ninth and both runners advanced on a wild pitch before De La Cruz lined a single to left field that scored Jon Berti and Brian Anderson.

"I thought his stuff was fine," Brewers manager Craig Counsell said. "No issues with his stuff. They had some good at-bats. In the end, the wild pitch is probably what hurt us in the inning."

Berti walked and swiped second one out later for his major league-leading 39th stolen base.

"When Berti gets on, you have to deal with him the whole time," Marlins manager Don Mattingly said. "It looked like the wild pitch, he was trying to keep him on at second and one got away from him. That really helped us, obviously."

Williams downplayed Berti being a threat to steal.

"I just didn't execute my pitches. That's really what it comes down to," the reliever said.

Peter Strzelecki relieved Williams and got the final two outs of the inning.

De La Cruz was recalled from Triple-A Jacksonville on Sept. 2. He's hit safely in 15 of 20 games since then with four home runs and 16 RBIs.

"Since he's come back from Triple-A, he's been really good," Mattingly said. "He hung in there enough to get into that count. He got enough on it and hit it in the right spot."

Richard Bleier pitched a scoreless ninth for his first save of the season. Tommy Nance (2-3) picked up the win with a scoreless eighth.

Milwaukee pushed across two runs in the sixth.

Huascar Brazoban relieved Jeff Fishman with two on and one out. Andrew McCutchen walked to load the bases. Brazoban hit Luis Urias with a pitch to force in a run and then Victor Caratini's run-scoring groundout gave the Brewers the lead.

Peyton Burdick drove a 2-0 sinker from Milwaukee starter Alan Ashby off the bottom of the scoreboard in center field for a two-run shot in the third. Jordan Groshans was aboard on a check-swing roller.

Marlins starter Edward Cabrera completed his warmup pitches before the Brewers batted in the fourth, but couldn't continue.

Cabrera retired the nine batters he faced, five on strikeouts. The 23-year-old left-hander was looking to bounce back from his last start against Washington on Sept. 25 when he left after 3 2/3 innings with a right ankle strain.

Mattingly explained that Cabrera appeared to catch that same ankle on the mound on a strikeout pitch to Tyrone Taylor to end the third.

"He worked his way back to make this start," Mattingly said. "It's just unfortunate he catches it."

Ashby made his 26th appearance and 19th start in a season marred by two stints on the injured list. The left-hander was out with left forearm inflammation from June 17 to July 1 and left shoulder inflammation from Aug. 20 to Sept. 19.

Trevor Gott relieved Ashby with one out and one on in the fifth. Gott retired the next two batters and then three in the sixth.

NOT DRIVING 'EM IN

The Brewers were 0 for 7 with runners in scoring position and left nine on base overall.

"We just haven't been able to break it open," Yelich said. "We've given ourselves opportunities and put ourselves in good positions. We haven't really cashed in on it."

Marlins ace Sandy Alcantara, a top contender for the NL Cy Young Award, was shut down for the rest of the season.

"We've got to do the best thing for Sandy, and we felt like this is it," Mattingly said.

Alcantara is 14-9 with a 2.28 ERA over 32 starts. He leads the majors with 228 2/3 innings and six complete games, four of which have come against the NL division leaders - Atlanta, Los Angeles and St. Louis.

"They made that decision and I respect that," Alcantara said.

He had a one-word description for his 2022 season.

Alcantara will continue to stay with the team.