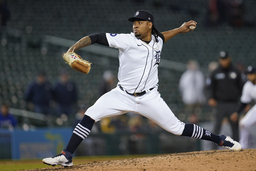 DETROIT (AP) Miguel Cabrera hit his 507th home run, Detroit got nine innings from its bullpen and the Tigers beat the Kansas City Royals 2-1 on Wednesday night for their fifth straight victory.

MJ Melendez led off the game with a home run for Kansas City, and Cabrera hit a two-run shot in the bottom of the inning. He has 1,845 RBIs, moving him past Carl Yastrzemski for 12th place on the career list.

"It was a good pitch to a really good hitter," Royals starter Daniel Lynch said. "I don't get as upset about those, because I executed my pitch. One of the best to ever do this just got me."

Scheduled Tigers starter Matt Manning was scratched just before game time because of arm fatigue. He doesn't expect to pitch again this season.

"I wanted to be precautionary," Manning said. "With the position we're in, I was just looking more toward 2023 and not wanting to risk anything."

"They came back exactly as we expected," he said. "A little bit of fatigue and a little bit of inflammation. He's going to get further evaluations, but the good news is we feel he'll be fine."

Will Vest pitched the first inning, allowing Melendez's homer, and the next six relievers combined for eight shutout innings. Gregory Soto pitched the ninth for his 29th save.

Daniel Norris (1-0) was credited with the win after pitching two scoreless innings.

"It's tricky, because you expect to see one pitcher two or three times and then maybe a reliever or two," Melendez said. "Instead, we were facing a different pitcher with different stuff almost every inning."

The Tigers need one win in their last eight games to avoid 100 losses.

"It has been a frustrating season, because we have known all year that we were better than we were playing," said Eric Haase, who scored on Cabrera's homer and caught all seven pitchers. "This is what we should have been doing all year."

Kansas City had 10 hits and six walks, but Kyle Isbel was thrown out stealing twice and the Royals left 13 batters on base.

"When you face seven relievers, you figure you will run into one who doesn't have his best stuff," Royals manager Mike Matheny said. "That didn't happen tonight. We had plenty of guys on base - I think we had a runner in every inning other than (the third and) the ninth - we just couldn't get the big hit we needed.

"We definitely left some money on the table."

Lynch (4-12) allowed two runs on five hits in six innings. He walked one and struck out four.

"I thought his changeup really stood out tonight - he was able to use it in big situations - but his slider was good and he had a good fastball," Matheny said.

The Tigers loaded the bases with one out in the third, but Cabrera bounced into a 6-4-3 double play.

Kansas City loaded the bases in the sixth and seventh innings, but Andrew Chafin came out of the bullpen to retire Melendez in the sixth, then got out of his own jam in the seventh by striking out Hunter Dozier and getting Drew Waters to ground out.

Because Manning was listed as the starting pitcher on A.J. Hinch's lineup card, he will be listed in the box score and credited with an appearance. However, because he didn't pitch to the first batter of the game, Vest gets credit for the first start of his 88-game major-league career.

In fact, Vest said he doesn't remember ever starting a game in his life, dating back to Little League.

Melendez's 18th homer moves him into sole possession of seventh place for a Royals rookie. He needs one more to tie Eric Hosmer (2011) for sixth and two to move into a tie for fourth with Mark Quinn (2000) and Bobby Witt Jr., who has 20 this season.

Harold Castro entered the game with three or more hits in his last three games, one short of the longest streak by a Tiger in the last 85 years. Castro entered the game in the ninth inning as a pinch runner, replacing Cabrera, but the game does not count against his streak since he didn't bat. Willie Horton had a four-game streak in 1965, as did Magglio Ordonez in 2008. Ty Cobb (1907) and Gee Walker (1936) hold the franchise record at five games.

The teams will decide their 19-game season series on Thursday. Eduardo Rodriguez (4-5, 4.37) is scheduled to start for the Tigers against Jonathan Heasley (4-8, 4.87).