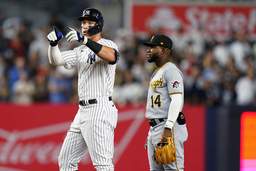 NEW YORK (AP) A sellout crowd of 46,175 groaned as Aaron Judge left the batter's box in the first and fifth innings.

"Fans packed it out to see us win a ballgame and see some homers," he said with a widening smile and a twinkle in his eyes, "so I think I got to cut out this double stuff, I guess."

A day after hitting home run No. 60 to spark a stunning five-run, ninth-inning rally capped by Giancarlo Stanton's game-ending slam, Judge lined a double to left on the first pitch to him from Roasny Contreras (5-5) and scored on Oswaldo Cabrera's grand slam.

Cabrera and Gleyber Torres had five RBIs each. Torres homered twice in the eighth inning, one to right and one to left, raising his season total to 23.

With 14 games left, Judge leads the AL in average (.317), home runs and RBIs (128) and is positioned to become the first Triple Crown winner in a decade.

Maris' sons and Judge's family were in the stands. Applause started whenever Judge walked onto the on-deck circle, and fans stood and snapped photos in anticipation during each trip to the plate.

"It felt like waiting for that big moment," Yankees manager Aaron Boone said.

Judge hit a one-hop double over the wall in the left-field corner in the fifth and scored on Torres' single. He also struck out and grounded out, then got one more time at-bat as the eighth batter in eight-run eighth. A four-pitch walk by rookie Eric Stout - all chanegups - promoted boos.

"I'm not going to give in 2-0, 3-0 and throw him something, regardless who it is honestly, especially with a lefty on deck," Stout said.

New York (90-58) closed in on its sixth straight postseason berth and 24th in 28 years. The Yankees opened a 6 1/2 game-lead over second-place Toronto in the AL East and with one more win would clinch no worse than a wild card.

Cabrera made the Yankees the first team in major league history to end a game with a slam and hit another in the first inning of its next game, according to STATS. The only previous teams to hit slams in the last inning of a game and the first of the next were the 1955 Boston Red Sox and the 2017 Los Angeles Dodgers.

Cabrera has three homers and 14 RBIs in 30 games since his debut on Aug. 17. With the bases loaded on Judge's double and a pair of walks by Contreras, Cabrera drove a hanging slider into the right-field bleachers.

New York has four slams in four games against the Pirates this season, including in consecutive innings on July 6. The Yankees' 10 slams this season are their most since 2012.

IN OTHER YANKES NEWS

Harrison Bader had a two-run double in the big eighth and has five RBIs in his first two games with the Yankees. ... Luis Severino (6-3) returned from a strained right lat muscle that had sidelined him since July 13 and allowed one run and two hits in five innings with six strikeouts. He reached 98.9 mph.

Contreras struck out a career-high 10, allowing six runs and six hits in 4 2/3 innings. ... Ke'Bryan Hayes had a sacrifice fly and RBI single for Pittsburgh (55-94).

Pittburgh's ONeil Cruz was given a Paul O'Neill No. 21 jersey and spoke with O'Neill - whom he is named after - by video chat. O'Neill is not vaccinated against COVID-19 and broadcasts Yankees' games from home in Ohio.

Yankees: RHP Scott Effross (shoulder strain) will be activated Thursday. ... LHP Zack Britton finished his minor league rehab assignment following Tommy John surgery and hopes to be actived in a few days. ... INF-OF Matt Carpenter (broken left foot) had an X-ray Tuesday and was cleared for more weight-bearing work. He'll have another X-ray in nine or 10 days. ... New York is trying to pick the right time to activate INF DJ LeMahieu (right second toe), who likely will not be 100%. ... OF Aaron Hicks was feeling ill and left the ballpark before the game.