McCutchen homers, drives in 3 in Brewers' 8-4 win over Cards 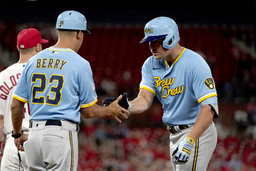 ST. LOUIS (AP) Andrew McCutchen homered and drove in three and the Milwaukee Brewers used eight pitchers in an 8-4 victory over the St. Louis Cardinals on Tuesday night.

The Brewers moved within seven games of the NL Central-leading Cardinals.

"We just take it day by day, at least I do," McCutchen said. "You know, I don't even know where we are right now in the standings."

Down three starters to injuries, the taxed Brewers staff was stretched even further when starter Matt Bush left after just 15 pitches because of right groin discomfort. Bush was the starter in what the club had already designated as a bullpen game.

Luis Perdomo (2-0) was the winner, allowing one run in three innings. Perdomo, Brad Boxberger, Hoby Milner, Justin Topa, Taylor Rogers and Brent Suter combined to retire 20 of 22 batters from the third inning on.

"I thought it started with Luis Perdomo for sure," Counsell said. "His giving us three innings after really having to use two guys to get through the first was enormous and put the game back in order. Box's inning was really important, I think just to get us kind of some matchups for the rest of the game. The guys just kind of took it from there. It was great effort."

"Beating a really good team at their place with the bullpen game gives us a lot of confidence going forward, no doubt, but every day is a new day," Suter said. "Next time we're called upon to do that, we got to go out and execute. We can't lose any steam or lose any focus."

McCutchen hit his 17th homer of the season, a two-run blast off Jordan Montgomery in the fifth, to break a 4-all tie. Christian Yelich added to the lead by getting hit by Packy Naughton's pitch with the bases loaded in the sixth.

Hunter Renfroe had a pair of hits including an RBI single in the eighth.

Counsell was pleased with his hitters' approach against Montgomery.

"He pitches in very very well and that's what he's that's what he's been really good at," Counsell said. "It's that fine line at swinging at that strike in that's on the corner that's tough to do anything with, and we pushed him out over the plate a little bit."

The Brewers took a 2-0 lead in the first on RBI doubles from Willy Adames and McCutchen. Adames tied it with an RBI single in the second and Yelich drove in another on a fielder's choice.

It was the worst start in eight tries as a Cardinal for Montgomery (8-4), who was acquired at the trade deadline from the New York Yankees. Montgomery allowed six runs, four earned, and gave up seven hits while striking out six.

Nolan Arenado had a two-run double in the first and Albert Pujols added an RBI single to give the Cardinals a short-lived 3-2 lead.

Tommy Edman's RBI single in the second tied the game at 4-4. Edman has a career-high 14 game hitting streak.

"Each one of their guys, we know them really well," Cardinals manager Oliver Marmol said of facing so many pitchers. "Our hitters meeting, we knew coming in this is what it would look like. We game planned for it. They beat us."

FACE IN THE CROWD

Former Cardinals first baseman Matt Adams was shown on the video board after the fourth inning and waved to the crowd from his seat.

Cardinals: OF Dylan Carlson (left thumb sprain) took swings and played catch and is on track to begin a rehab assignment on Friday.

Cardinals RHP Adam Wainwright (10-9, 3.33 ERA) will start the second of a two-game series against the Brewers and RHP Corbin Burnes (10-6, 2.93 ERA). Wainwright and catcher Yadier Molina are expected to start game No. 325 together as batterymates, which would break the all-time record set by the Detroit Tigers duo Mickey Lolich and Bill Freehan (1963-1975). Burnes is 2-0 with a 0.43 ERA in three starts against St. Louis this season.