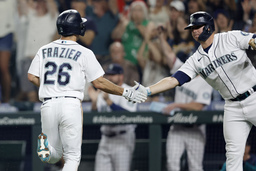 SEATTLE (AP) George Kirby already pitches with a level of confidence not often found in rookies. It's why he's become such an asset for the Seattle Mariners.

Shutting down the hottest team in baseball should only help Kirby's confidence grow, especially with what's likely a big role in Seattle's push for a playoff spot and potentially into the postseason.

"You can't be scared. You have to be confident, just do what you keep doing," Kirby said. "I didn't want to change anything today. I just wanted to attack them."

Sam Haggerty and Eugenio Suarez each hit a solo homer, Kirby pitched into the seventh inning and Seattle beat Atlanta 3-1 on Saturday night to snap the Braves' eight-game winning streak.

A day after the World Series champion Braves took sole possession of first place in the NL East for the first time all season, they fell a half-game behind the Mets again after New York beat Miami earlier in the night.

It was another night of dominant pitching, and two big swings by the Mariners against Atlanta starter Max Fried proved to be the difference.

Haggerty hit the first pitch of the fifth out to left field for his fifth home run. Suarez followed an inning later, hitting a two-out shot to center for his 28th of the season. It was the first time this year Fried allowed multiple home runs in a start.

Julio Rodriguez lined a two-out RBI double in the seventh off reliever Jesse Chavez that didn't stop rolling until it reached the wall in right-center field and scored Adam Frazier from first.

Seattle gained a game on Tampa Bay and didn't lose ground to Toronto in the tight race for three American League wild cards. Seeking their first postseason berth in 21 years, the Mariners are five games ahead of Baltimore for the final spot.

"That's a great team. They're going to be deep in October and for him to do what he did tonight to get us back into this series, I can't speak enough about what George did tonight," Haggerty said.

Kirby (7-3) was outstanding in the 21st start of his rookie season and only some bad luck kept him from pitching deeper. He struck out six, didn't walk a batter and over his past 11 starts has a 1.99 ERA.

"The first time I've seen him and he works fast, gets the ball over the plate. He's got a good feel for the secondary stuff. Impressive guy," Atlanta manager Brian Snitker said. "I mean, he was just on the attack all night. There were a lot of strikes. I can see why he is successful."

Kirby shut out the Braves for six innings on two hits and retired 12 straight until Dansby Swanson's base hit leading off the seventh. Austin Riley hit what appeared to be a double-play ball but it bounced off shortstop J.P. Crawford's glove for an error, putting runners at first and third with no outs.

Andres Munoz took over and limited the damage to one run that scored on Matt Olson's groundout. Erik Swanson retired the Braves in the eighth and Paul Sewald pitched the ninth for his 19th save.

"There's no more pressure on anybody than the starting pitcher every day. And understanding what was ahead of us tonight, I thought George could not have handled it any better," Seattle manager Scott Servais said. "You go out, you attack, you stay aggressive and that's exactly what he did."

Fried (13-6) made his first start in interleague play this season and had won his previous nine starts against AL teams. His final line was almost a mirror of Kirby's, throwing six innings and striking out six, but the two home runs proved the difference. Over his previous 14 starts, Fried had allowed two total home runs.

The game was played with the Puget Sound region engulfed in smoke from nearby wildfires. Conditions deteriorated on Friday but got significantly worse after a new fire broke out overnight about 65 miles northeast of Seattle. Ash was falling throughout the region during the day and air quality readings during the game were in the 170 range, which is considered unhealthy.

It also started affecting the play on the field. Atlanta right fielder Robbie Grossman briefly lost a popup in the sky before recovering in time to make the catch in the fifth inning. In the sixth, Suarez never saw a foul pop off the bat of Grossman that fell on the dirt in front of the Braves dugout.

Braves: RHP Jake Odorizzi (5-5, 3.90 ERA) makes his fourth start this season against Seattle. Odorizzi is 1-1 with a 2.00 ERA in his previous three, all with Houston. He is 4-6 in 16 career starts against the Mariners.

Mariners: LHP Marco Gonzales (10-13, 3.98) makes his 28th start of the season looking to rebound from a loss in his last outing when he threw seven innings and allowed three runs to the Chicago White Sox.