Harper, Phils get gift in 9th, send Miami to 8th loss in row 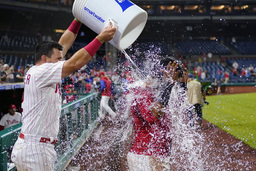 PHILADELPHIA (AP) A frustrated Bryce Harper thought he was headed back to the bench. Moments later, he was hollering in the midst of a wild celebration.

Harper got a gift double in the ninth inning when Miami left fielder Brian Anderson slipped chasing a flyball, then hustled home as Jean Segura flipped his bat high after hitting a single that sent the Philadelphia Phillies over the Marlins 3-2 Tuesday night.

"It's huge anytime you can win a game," Harper said.

Edmundo Sosa homered and doubled and Aaron Nola struck out 10 for the playoff-contending Phillies, who rebounded from a poor road trip in which they lost five of six to the sub-.500 Diamondbacks and Giants.

Harper had struck out in all three of his at-bats and rolled his eyes when he sliced a high fly down the line in medium left field with one out in the ninth. Anderson ran a long way in pursuit and appeared to get there in time to make the catch, but stumbled on the edge of the side warning track.

The ball fell just inside the line for a double. Harper admittedly didn't hustle out of the box, believing he would be out, and just beat Anderson's throw to second.

"I've got to be better there in that situation," he said. "Just glad I was able to get in there and score on that ball and win the game."

Miami lost its eighth in a row and has scored no more than two runs in nine straight games.

"It seems like teams that are losing a lot, that's the kind of thing that happens to you," Marlins manager Don Mattingly said. "When you're winning, you get the other side of that."

Tommy Nance (0-3) intentionally walked J.T. Realmuto, and Segura lined a single to right. Harper just beat the throw by Avisail Garcia to send the Phillies into a raucous celebration near the first-base bag.

Segura threw his bat way, way into the air after the hit.

"It made me angry," Segura said of the intentional walk in front of him. "The best part of this is the `W.' We've been playing rough baseball lately."

Anderson drove in both runs for the Marlins.

Nola reached 200 strikeouts this season, allowing one run in 6 2/3 innings. He has been one of the Phillies' top starters in each of his eight years with the club, but has struggled at times late in the season with the Phillies in playoff contention - he entered with a 9-14 record and 4.60 in 33 career starts in September and October.

"The main focus was to get the leadoff guy out, fill up the zone and get early outs," Nola said. "I felt really good and commanded my fastball well, which helped me out."

"It was an extremely important win for us," Realmuto said. "Can't waste a start like that from Nola."

The 29-year-old Nola didn't allow a hit until the fourth, when the Marlins recorded three of their four hits against him and their only run. He gave up a leadoff single to start the fifth, then retired seven in a row before being lifted after walking JJ Bleday with two outs in the seventh.

"He kept us in it all night," Harper said.

The Marlins threatened in the ninth against David Robertson (4-2), getting runners to first and second with two outs, but the right-hander got Charles Leblanc to fly out to end the frame.

The Phillies went ahead in the sixth with help from video review. Sosa led off with a double and went to third on a wild pitch. With one out, Alec Bohm lifted a fly ball to deep left. Anderson's strong throw beat Sosa to the plate, but the run scored after review when catcher Nick Fortes was ruled to have blocked the base path.

"I feel like we're trying to micromanage baseball," Luzardo said. "It feels like fans want to see real baseball."

Said Mattingly, "I would disagree, but I know they're cracking down on it from the standpoint of where guys are setting up."

Marlins: OF Garcia (left hamstring strain) returned to the lineup after being sidelined since Aug. 2.

Phillies: RHP Zack Wheeler (right forearm tendinitis) played catch off flat ground. Wheeler, who has been on the IL since Aug. 22, could progress to throwing in the bullpen if he feels good on Tuesday. . Right-handed reliever Seranthony Dominguez (right triceps tendinitis) and RHP Zach Eflin (right knee bruise) faced live hitters on Tuesday. Both could start rehab assignments soon if they respond favorably on Wednesday.