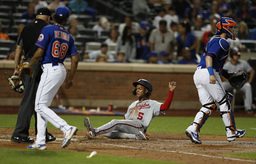 NEW YORK (AP) Mets ace Max Scherzer realized something was off. So rather than push through, he smartly pulled himself out.

Scherzer is confident he'll make his next start as scheduled.

"Nothing tightened up - I just had general fatigue overall on my left side," Scherzer said. "That's where you can run into injury, is when you're pitching through fatigue. So that was the reason to come out."

Scherzer, who missed almost seven weeks earlier this season with a left oblique strain, had his fastball clocked as high as 96 mph. Despite dealing with fatigue that began in the fourth inning, he retired his final seven batters before heading straight to the tunnel leading to the Mets' clubhouse following the fifth.

"This was a precautionary move given the history of the oblique here," Scherzer said. "Was there a scenario where I could go out there and pitch the sixth and be OK? Yeah. That could have happened. But if I went out there in the sixth and I got hurt, there's no way I could come in here and look the guys in the face and say I made the right decision."

Scherzer attempted to complete the sixth inning with the left oblique injury against the St. Louis Cardinals on May 18 but left in the middle of a two-out at-bat against Albert Pujols. The 47-day absence was the longest IL stint of his career.

"Just couldn't take any risk, especially where the calendar's at," Scherzer said. "There's not a lot of time to re-ramp back up. So I think that played just as much of an important factor in coming out after five."

Scherzer was already scheduled to make his next start on six days of rest due to the Mets' off-day Thursday. He's scheduled to pitch against the Miami Marlins on Friday night.

"Get some days off and I should be feeling good here pretty soon," Scherzer said.

The three-time Cy Young Award winner, making his third attempt at earning the 200th win of his career, allowed three hits, including Luis Garcia's homer with one out in the first. He walked one and struck out five.

"He's very frank about what he was feeling and we reacted to what a really good pitcher that knows himself said," Mets manager Buck Showalter said. "Been able to have that communication all year and it's worked out pretty well. Tonight, I think, was a good example of that."

The five innings pitched tied a season low for Scherzer.

Lane Thomas hit a tiebreaking solo homer with one out in the eighth off Adam Ottavino (5-3) for the last-place Nationals.

Garcia also doubled twice, then singled in a five-run ninth.

Patrick Corbin (6-17), who leads the majors in losses and has the highest ERA (6.28) among qualified pitchers, earned his second straight win. He gave up three hits, including Eduardo Escobar's homer in the third, and walked one with five strikeouts in seven innings.

Corbin threw a first-pitch strike to 17 of the 25 batters he faced, including 13 of the final 16.

"That's what made him effective - strike one, strike one," Nationals manager Dave Martinez said. "Attacked the hitters. He was awesome today."

Corbin is 2-1 with a 2.96 ERA in four starts since being skipped once in the rotation in early August.

"I think getting away from going out there every fifth day for a start (to) just kind of relax or just get a little time to think about some things was the biggest thing," Corbin said. "Feeling good and just looking forward to the rest of my starts."

Thomas and Josh Palacios each had an RBI single in the ninth and CJ Abrams hit a two-run single.

Nationals: DH Nelson Cruz (right knee contusion), who fouled a ball off his knee Friday and left after two at-bats, felt better Saturday and was available off the bench.

Mets: RHP Trevor May (undisclosed) was placed on the IL. The Mets recalled RHP Bryce Montes de Oca from Triple-A Syracuse. Montes de Oca made his big league debut by recording the final two outs in the ninth. . RHP Tylor Megill (shoulder strain) is scheduled to make his second one-inning rehab appearance for Double-A Binghamton on Sunday. . LHP Joey Lucchesi (Tommy John surgery) threw two scoreless innings Saturday in his fourth rehab appearance for Single-A St. Lucie. Like Megill, Lucchesi is rehabbing as a reliever in hopes he can contribute out of the bullpen.

Mets: RHP Carlos Carrasco (13-5, 3.92 ERA) is expected to be activated from the injured list. Carrasco, who suffered a left oblique strain against the Atlanta Braves on Aug. 15, threw 55 pitches in a simulated game last Monday.