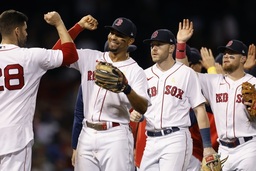 Pivetta exited with a bruised left calf after getting hit by Leody Taveras' comebacker in the third. Pivetta threw out Taveras at first base to end the inning, but hobbled off the field.

"Yeah, that was pretty frustrating. I felt pretty good tonight," said Pivetta, who leads the staff with 27 starts, the only member of the rotation who hasn't missed a start this season.

After the game, though, he wasn't sure if he would make his next start.

"I take really great pride in that," Pivetta said. "I look forward to continuing that streak and continuing getting on the mound."

Pivetta was replaced by right-hander Tyler Danish (3-1), who earned the win with a scoreless inning.

Texas starter Dallas Keuchel took the loss, going 4 2/3 innings and matching a season high by allowing seven earned runs. In two starts since joining the Rangers as a free agent on July 26, Keuchel has given up a combined 14 earned runs over 10 innings on 18 hits.

Keuchel, the 2015 AL Cy Young Award winner, is 0-2 with Texas and a combined 2-9 with a 9.20 ERA with Texas, the Chicago White Sox and Arizona Diamondbacks this season. He entered the game with a major league-high 8.84 ERA.

"I felt I pitched a whole lot better than the line read," Keuchel said. "It felt like I was making pitches and they were battling, like the classic Red Sox game at Fenway Park. I established all my pitches, but this year is what it is. We're working towards an end goal of putting up some zeroes."

Wong hit a two-run homer in the seventh that scored Hernandez, who had walked. Wong, a 26-year-old catcher-second baseman, played his sixth game for Boston this year.

"That one, it was a good swing," Boston manager Alex Cora said. "He's got some pop. I remember last year he hit a homer in spring training to straight center that I was, like, impressed. ... Now, he looks a lot stronger than last year. He's catching up with fastballs."

"Behind the plate he's really good. ... He's in command of the whole situation," he said. "We'll find him ways to get at-bats and keep rolling."

Xander Bogaerts hit an RBI double in the first.

Texas rookie Bubba Thompson led off the third with a single and stole second base, his 10th swipe since making his major league debut on Aug. 4. Thompson scored on Corey Seager single.

Boston scored three times in the fourth on an RBI single by Hernandez and a two-run single by Christian Arroyo.

Rangers: RHP Joe Barlow, bothered by a right index finger blister for almost two months, needs more time before he can be activated. He was eligible to be activated Friday from his second stint this season on the injured list with the ailment. Since July 13, he has missed 45 games because of this issue.

Red Sox: Cora said the team's medical staff was planning to meet later on Friday to discuss a course of action for RHP Tanner Houck, who has been out since Aug. 6 with lower back inflammation. "There's a big possibility he'll have surgery," Cora said. If so, Cora expects Houck would be ready for spring training. ... 1B Eric Hosmer, out since Aug. 21 with low back inflammation, "is not progressing the way we thought he was going to be," Cora said. Hosmer has been shut down from baseball activities but is receiving treatment. ... RHP Nathan Eovaldi, out since Aug. 19 with right shoulder inflammation, threw 25- to 30-pitch bullpen session on Friday and is expected to throw another on Monday, with Cora saying Eovaldi felt "a lot better than a few weeks ago." ... RHP Zack Kelly was placed on paternity leave. Danish was recalled from Triple-A Worcester to take Kelly's place on the roster.

The Rangers and Red Sox continue their four-game series on Saturday afternoon. Boston rookie RHP Brayan Bello (0-4, 7.27 ERA) is making his eighth start, first against Texas. The Rangers had not yet named a starter, with the choice depending on bullpen usage in Friday's game.