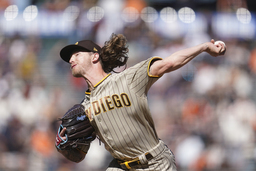 Luis Campusano and Jake Cronenworth added RBIs for San Diego, which has won five of its last six games and five straight against San Francisco.

"To come here and take three from them, that was a huge win for us," Machado said. "We're playing good collective baseball and that's what we're going to have to do here in this last stretch."

"It's been like two months since I got a win," Musgrove said, laughing. "It just feels nice to be back in the win column."

All-Star closer Josh Hader overcame his recent struggles to secure his 30th save in 33 opportunities and his first with the Padres.

"It was a step in the right direction," Hader said. "I felt like today, even though I got behind on a few guys, I was still able to execute the big pitch that I needed to make."

Alex Wood (8-12) lost his third consecutive start, giving up four runs on five hits with five strikeouts and a walk in 4 2/3 innings.

Machado broke a scoreless tie with an RBI single in the top of the fourth. San Diego added three runs in the fifth on an RBI single by Campusano and a two-run double by Machado.

Cronenworth tacked on a sacrifice fly in the sixth to make it 5-0.

Wynns got San Francisco on the board with an RBI double in the bottom of the sixth. Estrada picked up an RBI on a fielder's choice in the seventh, followed by Gonzalez's RBI single two batters later.

Pederson brought the Giants within a run with an RBI single in the eighth. San Francisco put the tying run on second base with one out in the ninth, but Hader retired Gonzalez and Wynns to end the game.

The Padres improved to a major league-best 26-13 in one-run games.

"I think this was huge to be able to win three one-run games," San Diego manager Bob Melvin said. "That's how we were doing it earlier in the season in finding a way to win these games as we did here this weekend."

Prior to the start of the third inning, Giants shortstop Brandon Crawford was ejected by third-base umpire Ryan Blakney for arguing a check-swing call in the bottom of the second. Crawford believed he checked his swing on a 1-2 slider from Musgrove, but Blakney ruled it a swing for strike three. It was Crawford's third career ejection.

Major League Baseball announced that the Padres and Giants will play in the first regular-season games in Mexico City next year on April 29 and 30. San Diego will be the home team in both games at Estadio Alfredo Harp Helu Beisbol.

"The food in Mexico City is something that I've always wanted to experience," San Francisco manager Gabe Kapler said. "Certainly excited about being a part of international baseball. Really looking forward to seeing Mexico City."

The two teams were originally scheduled to play there in 2020 but the games were canceled due to the COVID-19 pandemic.

Giants: OF Austin Slater entered as a pinch-runner in the eighth inning and scored a run after leaving Tuesday's game with a dislocated left pinkie. "Slater is doing better than expected," Kapler said. "(He) has less swelling in there. I think he's feeling optimistic." ... 1B Brandon Belt (right knee inflammation) is still considering season-ending surgery after getting a second opinion on his knee Tuesday.