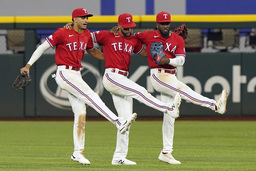 ARLINGTON, Texas (AP) Nathaniel Lowe, Ezequiel Duran and Mark Mathias homered in the first three innings, and the Texas Rangers held on to beat the Detroit Tigers 7-6 on Friday night.

Adolis Garcia extended his hitting streak to 22 games for Texas, matching Toronto slugger Vladimir Guerrero Jr. for the longest in the American League this season. Garcia reached on a dribbler down the third-base line in the third inning.

Lowe hit a 447-foot solo shot to center field in the first that cleared the batter's eye. His career-high 21st home run of the season gave him three in three games for the first time. He went 2 for 3 with a walk and is hitting .362 since the All-Star break.

"I've got good hitters in front and behind me," Lowe said, "and I'm getting some mistakes to capitalize on."

Duran launched a three-run homer to left in the second. Mathias added a two-run, opposite-field drive into the Texas bullpen in right-center in the third during his first career three-hit game.

The Rangers have won six of their last eight games and are 7-4 under interim manager Tony Beasley, who replaced Chris Woodward on Aug. 15.

Detroit rookie Riley Greene had a career-high three hits with four RBIs, including a two-run homer in the ninth.

Glenn Otto (6-8) gave up four runs in five innings for Texas. He had a 1.99 ERA in his previous four starts.

It was an unpleasant homecoming for Tigers starter Tyler Alexander, who graduated from Carroll High in nearby Southlake and pitched two seasons for TCU in Fort Worth. Alexander (3-8) allowed all seven Rangers runs, a career high, on eight hits in three innings.

"It looked like he struggled with command," Detroit manager A.J. Hinch said. "He struggled getting into counts. And then they hit him hard."

Jose Leclerc gave up Greene's homer but stranded the potential tying run at first base. He struck out three and earned his second save.

Lowe's homer was lefty-on-lefty. He went into play as the major leagues' best left-handed hitter against left-handed pitching this season, batting .336.

Leody Taveras had an RBI single for Texas in the third before Mathias' homer made it 7-2.

This is the first big league series in his home state for Houston-born Tigers rookie Kody Clemens, son of pitching great Roger Clemens.

"It feels good to be home," said Kody Clemens, who was promoted from Triple-A Toledo on May 30 and has appeared in 40 games as a utility player.

"It's a big homecoming," said Kody Clemens, who didn't get into Friday's game.

Tigers: SS Javier Baez returned to the lineup after missing Detroit's previous game Wednesday with back spasms. Baez went 0 for 5 with two strikeouts. . RHP Michael Pineda (triceps tightness) will pitch Sunday at Triple-A Toledo and probably return to the rotation next Thursday or Friday.

LHP Dallas Keuchel (2-7, 8.53 ERA) will make his Rangers debut Saturday night after being selected from Triple-A Round Rock. The 2015 AL Cy Young Award winner was designated for assignment by the Chicago White Sox after eight starts and again by Arizona on July 20 after four starts. He'll face Tigers LHP Eduardo Rodriguez (2-3, 3.89), who returned last Sunday after personal off-field issues had sidelined him since mid-May. He pitched five shutout innings to beat the Los Angeles Angels.