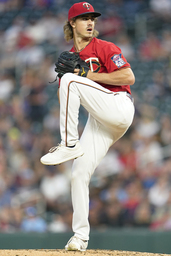 MINNEAPOLIS (AP) Gilberto Celestino hit a bases-clearing double and Gary Sanchez added two-run home run, all in a six-run third inning, as the Minnesota Twins snapped a six-game skid with a 9-0 victory over the San Francisco Giants on Friday night.

Carlos Correa and Kyle Garlick also homered for Minnesota, which scored just a dozen runs and batted .176 during its nearly week-long losing streak.

Garlick had three hits in his return to the lineup after being sidelined since Aug. 1 with a right rib contusion.

"It was nice to be able to get on base a few times so that guys can do the hard labor behind me. And just keep innings going, keep them alive longer. And we were able to put up some runs," Garlick said.

Joe Ryan (10-6) said he didn't feel great, yet scattered just two hits and struck out eight in six shutout innings to become the first rookie in the majors to win 10 games this season. He's struck out an American League rookie-high 113 batters, including 20 in 18 2/3 innings over his last three starts.

Austin Slater, Mike Yastrzemski, Tony La Stella and Joc Pederson accounted for all of the hits for the Giants, who have lost six of eight.

Correa, 1 for 11 with four strikeouts when Minnesota was swept in Houston this week, homered to left in the first inning for a 2-0 lead.

Sandy Leon, Garlick and Correa singled to load the bases with no outs in the third. A sacrifice fly by Jose Miranda scored the first run. Three batters later, Celestino's double off the wall in right-center scored three more. After four more pitches, Sanchez lined a two-run home run to the shrubbery in front of the first row in right field to make it 8-0.

"I think it was good for everyone to be able to go out there early, get the job done early, and not have to be there for nine innings kind of almost on the edge," Minnesota manager Rocco Baldelli said.

Garlick homered off catcher Austin Wynns in the eighth.

In 15 of its past 16 games, Minnesota failed to score six runs.

San Francisco starter Alex Wood (8-11) had a season-worst start for the second straight Friday, allowing eight earned runs on six hits, including two home runs. He also hit two batters. In a 7-4 loss at Colorado a week ago, the left-hander allowed seven runs over 4 2/3 innings. He has allowed at least six earned runs in three of five August starts.

"I just think this time the guys need me to step up, and two bad ones in a row. Pretty frustrating overall," he said.

Ryan, who grew up rooting for Giants and was drafted by San Francisco in the 39th round of 2014 draft but did not sign, finished in style. He walked La Stella and hit Willmer Flores to start the sixth, before Pederson lined out and Evan Longoria and Thairo Estrada struck out.

"Hitting Flores with a 1-2 count, that shouldn't happen. A couple of the walks were a little annoying, but hey, it's baseball, you got to make adjustments and hone it in, and I was able to do that," Ryan said.

This is the Giants' first visit to Target Field, which opened in 2010. Since interleague play began, the teams have played four series in California and two in Minnesota, with the other occurring June 14-16, 2005.

San Francisco recalled LHP Scott Alexander from Triple-A Sacramento and optioned LHP Thomas Szapucki to the River Cats. Alexander signed as a free agent with the Giants on May 3.

In addition, LHP Sam Long was recalled from Triple-A Sacramento and placed on the 60-day injured list.

Giants: An MRI showed no new structural damage to the right knee of 1B Brandon Belt, who was placed on the 10-day injured list Wednesday due to discomfort. Belt is to see the San Francisco 49ers team doctor next week. He saw the same doctor after a previous knee issue. "We're going to rest and rehab and do so aggressively to give him the best chance to get back on the field," manager Gabe Kapler said.

Twins: To make room for Garlick, who was on the 10-day disabled list, IF Tim Beckham was designated for release or assignment. . On the 15-day injured list since Aug. 18 due to right shoulder tightness, RHP Tyler Mahle was to throw a 15-to-20 pitch bullpen session.