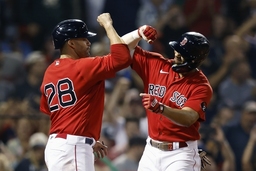 Kevin Plawecki had three hits and two RBIs for the Red Sox, who had dropped four in a row. Michael Wacha (9-1) struck out six in six innings, settling down after a shaky start.

"Definitely didn't the start the way I had planned but was able to make some minor adjustments with the mechanics," said Wacha, who improved to 3-0 since returning from the injured list. "With those changes, it helped make the off-speed pitches sharper and the fastball command got a lot better after that."

Boston (61-65) went ahead to stay with two in the fourth and fifth, and three more runs in the sixth.

Francy Cordero connected for his seventh homer in the fourth, and Jarren Duran added a sacrifice fly against Ryan Yarbrough (1-8). Kike Hernandez singled home Bogaerts in the fifth, and Plawecki doubled in Bobby Dalbec.

"Felt really good off the bat. Kind of knew it. That was a good one," said Bogaerts, who spiked his bat after watching the ball disappear into the night.

"It's been a struggle," Red Sox manager Alex Cora said. "In that at-bat, he let it loose."

Tampa Bay rallied in the eighth, scoring four times before Boston recorded an out. After Siri's three-run shot made it 9-8, Cora replaced Ryan Brasier with Matt Barnes.

Appearing in his third game in as many days, Barnes retired three straight batters with two strikeouts. Garrett Whitlock then pitched a 1-2-3 ninth for his sixth save.

The Rays got off to a fast start when Diaz jumped on the game's first pitch for his eighth homer. Choi connected for a two-run shot in the second, and Harold Ramirez's sacrifice fly made it 4-1 in the third.

Boston grabbed a 9-4 lead on Alex Verdugo's RBI triple in the seventh.

Rays right-hander Tyler Glasnow signed a $30.35 million, two-year contract that will delay the start of his free agency by one year, the team announced. The Rays' opening-day starter last year hasn't pitched this season after undergoing Tommy John surgery on Aug. 4, 2021. He went 5-2 with a 2.66 ERA in 14 starts last year.

Glasnow is making $5.1 million this year. He will get $5.35 million next season and $25 million in 2024, which is the first year he would have been eligible for free agency.

"Just to think about a healthy Glasnow that adds to what we consider a really good starting rotation as is, how can you not be excited about it?" Tampa Bay manager Kevin Cash said. "Knowing that we have him secure for two years, we are and should be thrilled about it."

Glasnow's quest to return to the Rays this season will include another live batting practice against hitters Sunday.

Rays: SS Wander Franco (hamate fracture) continues to work out at Tropicana Field. "Rehabbing and strengthening," Cash said. "We'll see where he's at on Monday." Franco has been on the IL since July 10. ... 2B Brandon Lowe left with a left elbow contusion. He was hit by a pitch in the third inning.

Red Sox: 2B Trevor Story (right hand contusion) was scheduled to make a second straight rehab appearance for Double-A Portland but Friday's game was postponed due to rain. Cora said after the game that it's possible that Story could be activated for Saturday's game. ... RHP Nate Eovaldi (right shoulder inflammation) threw a 25-pitch bullpen session. Cora mentioned that another bullpen session is possible before mapping out the next course of action. "My preference is for him to go out on a rehab assignment to make sure everything goes well," Cora said. "He always pushes for the opposite, but we have to be smart with this."