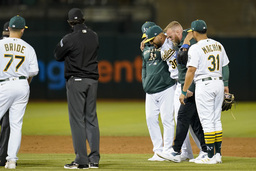 OAKLAND, Calif. (AP) Back in the batter's box at last, Giancarlo Stanton swung away and is confident each chance he gets at the plate the timing will continue to improve.

Just seeing him there again means so much to his teammates.

The Yankees slugger returned from the injured list and hit a two-run single to go with a bases-loaded walk, Josh Donaldson doubled twice and drove in three runs, and New York pounded the Oakland Athletics 13-4 on Thursday night despite a wild major league debut by reliever Greg Weissert.

"The timing's the most difficult part, but I've got to do extra drills before the game and while I'm down to kind of keep my timing and make sure it's not too much of an adjustment," said Stanton, who helped New York to its first four-game winning streak since June.

A's reliever Joel Payamps was helped off the field in the eighth after a comebacker by pinch-hitter Kyle Higashioka struck his left leg and bruised the calf. Oakland infielder Sheldon Neuse entered to pitch for his second appearance on the mound this season.

James Tallion (12-4) received all the support he needed and then some. Weissert relieved him in the seventh and nearly everything went wrong after the 27-year-old right-hander came up from Triple-A Scranton/Wilkes-Barre.

He hit Jonah Bride with his first pitch, then balked Bride to second. Then Weissert's second career pitch plunked Skye Bolt. After retiring Nick Allen on a flyball, Weissert walked Tony Kemp on four pitches. Then another free pass to Vimael Machin and Weissert's forgettable first night was done.

"Only up from there," manager Aaron Boone said. "But it doesn't change what we think about him. We think he can really help us. Get that one out of the way and try to get him back out there in another situation because he's certainly capable."

Bolt has a bruised right knee from being hit. Both he and Payamps were scheduled for further evaluation Friday.

Stanton played for the first time since being sidelined since July 24 with left Achilles tendinitis. He went 1 for 4 as designated hitter batting third. Manager Aaron Boone expects to use Stanton as DH early on as the slugger works back to full strength.

"Any boost I can give is huge and I'm glad that I can," Stanton said. "It just helps the dynamic of the lineup a bit. I'm just glad to be back."

Isiah Kiner-Falefa also singled in a pair of runs during the decisive second inning. Jose Trevino doubled in a run, Anthony Rizzo hit an RBI single and Andrew Benintendi had a sacrifice fly.

Taillion allowed only rookie Shea Langeliers' solo homer in the sixth, his last inning. He gave up six hits, struck out two and didn't walk a batter. Taillion is two wins off his career high of 14 accomplished in 2018.

The Yankees came out swinging.

James Kaprielian (3-8) was tagged for a career-high eight earned runs, matched his career high with six walks and gave up seven hits in 2 2/3 innings.

The last A's starter to allow eight or more earned runs and walk at least six batters was Rich Harden with eight earned runs and seven walks at Boston on Aug. 21, 2003, according to ESPN Stats & Info.

Oakland surrendered its second-most runs of the season - also giving up 13 at Atlanta on June 8 - behind a 14-4 loss at Minnesota on May 18.

The A's sent right-hander Frankie Montas to the Yankees at the trade deadline along with closer Lou Trivino, but Montas isn't slated to pitch during this four-game series.

"Frankie came through. He looks a couple years younger," quipped Oakland manager Mark Kotsay, sad not to face off against the pitcher.

Neuse recorded the final five outs to become the first A's position player to throw more than one inning since Mark Wagner worked 1 2/3 innings on Aug. 20, 1984.

Yankees: All-Star LHP Nestor Cortes went on the 15-day injured list with a strained left groin. The move was retroactive to Monday. The 27-year-old Cuban is 9-4 with a 2.68 ERA over 23 starts and a career-best 131 innings this season. He is 0-1 over four starts this month. ... LHP reliever Zack Britton will make another rehab appearance Saturday as he ramps up his throwing program following Tommy John surgery. He pitched Wednesday for the first time after an 11-month absence, facing two batters for the Class A Tampa Tarpons against the Clearwater Threshers. ... RHP Miguel Castro (strained pitching shoulder) is less than a week into his rehab throwing program and yet to go off a mound. ... Clay Holmes (left lower back spasm)

Athletics: CF Ramon Laureano took live batting practice as he works back from a strained left oblique. Kotsay doesn't expect Laureano to go on a rehab assignment before being activated.

RHP Gerrit Cole (9-6, 3.41 ERA) seeks to reach double-digit wins for the eighth time in his career when he pitches Friday night. He is mired in a six-start winless stretch during which he's 0-4 since beating Boston on July 17.

New York will face a former Yankee for the second straight game when LHP JP Sears (5-0, 1.93) pitches against his former team for the first time since joining Oakland in the Montas-Trivino trade.