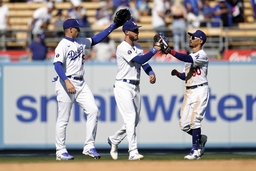 LOS ANGELES (AP) Los Angeles Dodgers rookie Ryan Pepiot celebrated his 25th birthday in style Sunday, getting the best of a matchup with All-Star Sandy Alcantara to lead a 10-3 victory over the Miami Marlins.

Pepiot, in just his seventh career start, held the Marlins to two runs on four hits in six innings as Los Angeles won its ninth consecutive home game. Cody Bellinger and Max Muncy hit home runs and Will Smith drove in three runs for the Dodgers.

"It was definitely exciting and I was glad to be able to power through and get to that sixth inning," Pepiot said of his longest start. "It definitely meant the world to me knowing that (manager Dave Roberts) let me go out there and stay out there. He trusted me to get the job done and I was able to pull through."

In a season where he has dominated opponents, Alcantara was no match for the Dodgers. Alcantara's 3 2/3 innings were a season low, while his six runs and 10 hits allowed were season highs. The right-hander had one walk and five strikeouts.

On July 19, Alcantara threw a scoreless second inning at Dodger Stadium in his second-All-Star Game appearance.

"Well, their lineup is the biggest struggle and they're going to make you work," Marlins manager Don Mattingly said of the Dodgers. "When you get them out, you have to fight for that out, then it keeps coming. Today, they were really on the fastball it seemed like. They had really good at-bats all game long."

Mookie Betts led off the game with a single and scored on Smith's two-out hit. The Dodgers made it 3-0 in the second when Bellinger followed a two-out triple from Joey Gallo with his 17th homer.

Bellinger entered with just two hits in his previous 22 at-bats and sat out three of the prior six games.

The Dodgers made it 4-0 in the third on an RBI single from Muncy.

"(Alcantara) throws a lot of strikes and we were able to get some good swings on some of those pitches and found some holes," Betts said. "We did a good job of not giving away at-bats."

Miami's JJ Bleday walked to lead off the fourth before Lewin Diaz hit his first home run of the season.

Smith's ground-rule double in the fourth gave the Dodgers a 6-2 advantage and ended Alcantara's game.

After struggling with his control at the start of his major league career, Pepiot (2-0) gave up only two walks with seven strikeouts over six innings.

Pepiot received some help from his defense. Gallo threw out a runner at home plate from left field in the first and making a diving catch in the third.

"I just settled down, getting back in the zone and getting back ahead of guys," Pepiot said. "Make them get themselves out."

The Dodgers made it 7-2 in the seventh inning on Muncy's 16th home run. Bleday hit his fourth homer in the eighth.

Mattingly said he remains confident in Alcantara (11-6), who has given up at least four runs in two of his last three starts. Alcantara is 2-3 in his last eight starts.

"I thought his stuff was good, honestly," Mattingly said. "He was easy early."

Mattingly noted Alcantara's pitches were timed at 98, 99 and 100 mph "where his stuff looked easy and he was on an extra day (of rest). I didn't see any tiredness look to it. You have to give those guys credit. It's a good lineup."

Dodgers: LHP Clayton Kershaw (back) will not have to go on a minor league rehab assignment, according to manager Dave Roberts. Kershaw has a bullpen session and a simulated game scheduled before he is activated from the IL. . RHP Blake Treinen (shoulder), who hasn't pitched since April 14, is targeting a Sept. 2 return.

Marlins: RHP Pablo Lopez (7-8, 3.83 ERA) will pitch in the opener of a three-game series at Oakland on Monday.

Dodgers: LHP Julio Urias (13-6, 2.40) will take the mound in the opener of a three-game home series against the Milwaukee Brewers.