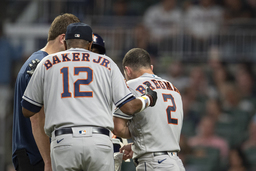 ATLANTA (AP) The last thing Matt Olson wanted to do was hit the ball.

Then he saw it heading for a spot in the infield where no one was standing.

Sometimes, hit `em where they ain't works just as well as smacking it over the wall.

Olson's check-swing double to left with the infield shifted the other way brought home the tying run in the 11th for Atlanta, and pinch-hitter Travis d'Arnaud won it with a single through Houston's drawn-in defense.

Rallying twice in extra innings, the Braves beat the Astros 5-4 on Saturday night for their 11th win in 12 games.

The reigning World Series champions are still three games behind the NL East-leading New York Mets, but no team is playing with more confidence than the Braves.

"We don't give up until the last guy," d'Arnaud said. "It's a contagious thing."

The Astros scored two in the 10th, only to have Atlanta match them in the bottom half - with 21-year-old Michael Harris II providing the big hit with an RBI double before he came around to score on Robbie Grossman's single through the shift.

Houston went back ahead on Jeremy Pena's slow roller that brought home the go-ahead run, but the Braves rallied again.

This time, they ended it.

After Dansby Swanson was placed at second base against Ryne Stanek (1-1), Austin Riley walked. Olson tried to hold up his swing, but it worked out just fine when he sent a run-scoring hit through the abandoned shortstop hole.

"I was not happy to make contact," Olson said. "Then I saw no one was standing there. I actually started laughing pretty quickly. Somehow, I wind up with a double."

With runners at second and third and no outs, the Astros intentionally walked William Contreras. But d'Arnaud lined one past diving first baseman Yuri Gurriel to win it for the Braves.

Jackson Stephens (2-2) earned the win by giving up an unearned run in the 11th.

"We fought, they fought," Astros manager Dusty Baker said. "It was a great game to watch if you're a fan."

Both starters turned in strong performances, each going six innings and allowing only a solo homer.

Cristian Javier pitched two-hit ball for the Astros but again failed to get much offensive support. Houston has been held to two runs or fewer in nine of his 23 starts, leaving him with a 7-8 record even though his ERA dropped to 2.88.

Rookie Spencer Strider surrendered three hits, walked two and struck out nine for the Braves. The growing popularity of the 23-year-old Strider, known for his thick mustache and 100 mph fastball, was evident from all the the fans in the sellout crowd of 42,893 wearing fake 'staches in his honor.

Atlanta's Vaughn Grissom kept up his torrid hitting since being called up from the minors less than two weeks ago.

The 21-year-old launched one into the Astros' bullpen in the fifth, giving him three homers in his first 11 big league games.

Grissom's homer came after Pena went deep for Houston in the top half of the inning to break up the scoreless duel. The Astros shortstop drove one the opposite way, the ball just clearing the tall wall in right field for his 16th homer of the season.

Astros slugger Yordan Alvarez was back at the ballpark, one day after shortness of breath led him to be taken to an Atlanta hospital for tests.

While doctors found no cause for his breathing problems, Houston held Alvarez out of the lineup Saturday and kept a close eye on him for any signs of further trouble.

Baker said Alvarez could return to the lineup as a designated hitter for the finale of the three-game series.

There was little indication of all the drama to come in extra winnings.

Through nine innings, the teams had combined for just seven hits and 21 strikeouts.

"When runs are at a premium, you know it's going to take a big hit," Braves manager Brian Snitker said. "They got some, we got one more."

Astros OF Mauricio Dubon wasn't seriously hurt after crashing into the wall attempting to make a catch in the fifth inning of Friday's game. Dubon was available Saturday but wasn't used. "He's better," Baker said. "He hit in the cage."