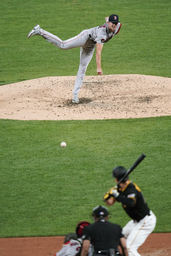 PITTSBURGH (AP) Nick Pivetta pitched one-hit ball over seven shutout innings for his first win since June 24, and the Boston Red Sox scored four runs in the first inning on their way to a 5-3 victory over the Pittsburgh Pirates on Tuesday night.

The Pirates' only hit off Pivetta came on Ben Gamel's two-out single in the first inning on a soft liner to left-center. Pivetta (9-9) struck out six and walked three while throwing 99 pitches and retiring his last nine batters.

"It was good," Pivetta said. "I was in the strike zone the whole game, which was nice. They had a few walks, which was unfortunate but (catcher Reese McGuire) did a good job back there. We were able to communicate really well and I was able to be proficient in the strike zone."

"Building on starts, I think it's really important," Pivetta said. "We just can feed off each other and compete against each other. I harped on this earlier (in the season) but the most important thing is putting up zeroes for your fellow starting pitchers so you can build off that and continue to move forward."

The first six Red Sox batters reached in the first inning against Mitch Keller (4-9), who lasted just two innings. He was removed because of right shoulder fatigue. Keller wound up being charged with five runs, four earned, while allowing five hits and three walks with one strikeout.

Keller had pitched into the sixth inning in each of his previous seven starts.

"(Pitching coach Oscar Marin) and I were talking, and we didn't like the way he was moving down the mound," Pittsburgh manager Derek Shelton said of Keller. "As good as his tempo's been and the way he's been attacking, he just did not look the same tonight. He said he didn't have any pain, but we didn't want to risk it."

The Red Sox added another run in the second to make it 5-0 when center fielder Bryan Reynolds dropped Verdugo's two-out fly ball for an error that enabled Tommy Pham to score.

Pham had two hits and scored two runs as the Red Sox won the fourth time in five games.

However, the Red Sox were held hitless over the last seven innings by relievers Chase De Jong, Austin Brice and Manny Banuelos.

"We need to be better than that," Boston manager Alex Cora said. "The quality of at-bats got worse throughout the game. I'm not saying we got lucky because we put up some good at-bats early on, especially in the first inning, but we can't stop. That way you get to the bullpen and all that, but at the end of the day, we'll take it."

The miscue ended Reynolds' 190-game errorless streak. Reynolds also had the first ejection of his career in the eighth inning when he was tossed by home plate umpire Roberto Ortiz for arguing a called third strike.

Gamel immediately followed with a three-run double to draw the Pirates within 5-3. He had two of Pittsburgh's three hits as the Pirates lost for the ninth time in 11 games.

John Schreiber got the final out in the eighth. Matt Barnes pitched a 1-2-3 ninth for his third save in five chances.

Pirates infielder Rodolfo Castro was suspended for one game by Major League Baseball on Tuesday for having a cellphone in his back pocket during a game last week.

The penalty, which included an undisclosed fine, had been set to take effect Tuesday night when the Pirates hosted Boston. The 23-year-old Castro appealed and can play until the process is complete.

"I just really want MLB to hear my version of the story and make sure they understand my heart behind everything," Castro said through an interpreter.

Castro's phone flew from his pocket when he made a head-first dive into third base at Arizona on Aug. 9.

Red Sox: Hernandez (right hip flexor/abdominal muscle hematoma) was activated from the 60-day injured list and INF/OF Rob Refsnyder (sprained right knee). came off the 15-day IL. Hernandez had been out since June 8 and Refsnyder since July 30. Hernandez started at shortstop in place of Xavier Bogaerts, who fouled a ball off his left foot last weekend, and went 0 for 3 with the sac fly and two strikeouts. INF Yolmer Sanchez was designated for assignment. . RHP Tanner Houck (lower back inflammation) has an issue with a disc in his lower back. He will undergo treatment the rest of this week then be reexamined by a spine specialist next week.

Pirates: 3B Ke'Bryan Hayes (mid-back muscle strain) was placed on the 10-day IL, retroactive to Aug. 13, and INF Kevin Padlo was recalled from Triple-A Indianapolis. Padlo started at first base and went 0 for 3.

Pirates: RHP Roansy Contreras (3-2, 3.78 ERA) will be recalled from Triple-A Indianapolis to make his first major league start since July 7.