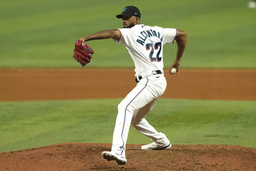 Although the Padres made Alcantara throw 76 pitches through the first four, the All-Star right-hander notched his 17th outing of at last seven innings. Alcantara (11-5) walked two and struck out seven on 108 pitches.

"It's always frustrating, you want to get out of innings with seven or 10 pitches," Alcantara said. "They were aggressive with me tonight and I was competing, throwing my best stuff."

Miguel Rojas and Jacob Stallings had three hits apiece and rookie JJ Bleday homered for the Marlins, who snapped a four-game skid.

Alcantara lasted a season-low 4 2/3 innings at San Diego on May 6, allowing three runs and five hits.

"The second half divides the men from the boys," Alcantara said. "I feel just as strong as I did at the beginning of the season."

Padres star slugger Juan Soto had one of the hardest-hit balls against Alcantara but Marlins left-fielder Luke Williams retreated and caught his drive on the warning track to end the fifth inning. Soto ended 0 for 2 with a walk.

"Everybody was grinding, everybody was taking really good at-bats the whole game," Soto said. "He's a great pitcher. He threw his stuff and at the end of the day, it didn't go our way."

While one streak ended, another continued for the Marlins. In the division era, they surpassed the 1979 Chicago Cubs for the second-longest stretch of games with three runs or fewer at 16. The 1969 California Angels had the longest drought at 17.

Miami struck early against Padres starter Joe Musgrove (8-6) with a two-run second. Bleday hit a leadoff homer and Rojas followed with a single. Rojas advanced to third on Stallings' single to right and scored on Lewin Diaz's sacrifice fly.

Rojas tripled in the sixth and Stallings followed with an RBI single to center over a drawn-in infield to pad Miami's lead.

"They were the best two guys in the order all night," Miami manager Don Mattingly said of Rojas and Stallings. "It was good to see Miggy use the whole field again and get back to being himself, not trying to do too much."

"Redemption - today's another day," said Scott, who squandered a save opportunity in the ninth Sunday. "It's my saying, and I was just going with it."

Musgrove was lifted after six innings. The right-hander allowed three runs, eight hits, struck out five and hit a batter.

Stallings and Musgrove formed a close bond when they were teammates with the Pittsburgh Pirates. Stallings didn't treat his friend kindly in the Marlins catcher's second three-hit game of the season.

"Joe is probably one of my favorite teammates of all time," Stallings said. "He's a great friend to me so it's always weird for me facing my friends. He didn't consider me a friend tonight, that's how intense he is. And I think I rose my level of focus even more."