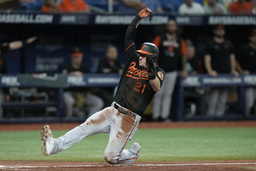 Rougned Odor had four of the Orioles' season-most 19 hits as Baltimore won for the eighth time in 10 games and moved into an AL wild-card spot, a half-game ahead of the Rays.

"Definitely one of our better offensive nights, the way we kept up those innings with the two-strike, two-out innings," manager Brandon Hyde said. "(We) got a bunch of hits up and down the lineup."

Mullins and Anthony Santander had three hits apiece for Baltimore. Austin Voth (3-1) took a no-hit bid into the sixth inning and won his second straight start.

"We've kind of caught fire and we're just keeping with it," said Voth, who was claimed off waivers from Washington on June 7. "It doesn't feel like we're cooling off or anything like that. We're rolling."

By the time Jose Siri got the Rays' first hit leading off the sixth, the Orioles had a 7-0 lead. Randy Arozarena followed with his 14th homer for Tampa Bay, which has lost four of five and is 6-12 since the All-Star break.

"We've got to somehow find a way to get out of this," Rays manger Kevin Cash said. "It's not coming easy for anybody."

Rutschman, the Orioles' prized rookie catcher, homered in the first off Corey Kluber (7-7), a blast that would have traveled an estimated 439 feet if not for the catwalk. Mullins' 10th homer came in the eighth off Jimmy Yacabonis.

Voth gave up two runs on three hits in a season-high 5 1/3 innings.

Mateo, who drove in two runs and scored twice, also contributed a fine defensive play at shortstop in the fourth, barely throwing out Brandon Lowe on a toss from his gloved hand.

"I'm very satisfied with that performance. It shows my hard work is paying off," Mateo said. "To go out there and do that, I feel really good about it and I want to come back tomorrow and do it all over again."

Second baseman Yu Chang pitched for the Rays in the ninth, giving up one run on three hits. His velocity ranged from a low of 37 mph to a high of 45 mph.

"It was definitely a little weird and uncomfortable hitting off a position player," Mateo said, "but I'm happy I got that fifth hit off of him."

BRETT BACK IN TOWN

Former Rays outfielder Brett Phillips, who was traded to the Orioles on Aug. 2, got a scoreboard tribute and an ovation after the third inning.

Phillips, who was raised in nearby Seminole, played parts of three seasons with the Rays and is best known for his game-winning hit in Game 4 of the 2020 World Series.

Orioles: RHP Tyler Wells, who has missed three starts with a left oblique strain, has "ramped up his rehab," Hyde said.

Left-hander DL Hall, Baltimore's first-round draft pick in 2017, was called up from Triple-A Norfolk and will make his major league debut Saturday. Shane McClanahan (10-5, 2.24 ERA), who is 4-0 against Baltimore, starts for Tampa Bay.