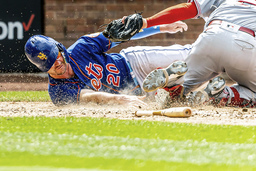 NEW YORK (AP) Francisco Lindor scored three runs, tying a franchise record by crossing the plate in 13 consecutive games, and the New York Mets breezed to their sixth straight win, 10-2 over the Cincinnati Reds on Wednesday.

Lindor finished 2 for 3 with a walk and a two-run single in the second inning that increased his RBI total to 82, matching Jose Reyes in 2006 for the most by a Mets shortstop.

"I've got to soak that in, that's pretty cool," Mets manager Buck Showalter said. "The team's been around a long time. When you start saying that, that gets your attention."

"Whenever you can do something cool, it's a blessing," Lindor said. "Being next to Reyes, someone I grew up watching, it's great. But I'm here to try to win a World Series. That's all I have in mind."

Lindor walked and scored the Mets' second run in the first. His single in the second made it 4-0. His run-scoring streak is the longest in the majors this season and matched David Wright (July 2008) for the longest in Mets history.

"The guys that came in are helping us win ballgames," Lindor said. "The front office did an amazing job of bringing the right group of guys that are going to fit in (and) are going to help us win."

Taijuan Walker (10-3) pitched six solid innings to reach double-digit wins for the first time since he went 11-8 for Seattle in 2015. Walker allowed two runs on five hits with three walks and five strikeouts.

New York has the second-best record in the majors (73-39) and outscored Cincinnati 21-5 in the three-game sweep. The Mets have not trailed during their six-game run, winning every game by three runs or more.

"Our guys haven't gotten out of sync for very long," Showalter said. "I've said many times it's about stretching out the good times and shortening up the bad ones. It's going to happen. They've done a good job of not getting into that snowball mode."

T.J. Zeuch (0-1) lost his Reds debut, allowing six runs on six hits and two walks with four strikeouts in four innings. Zeuch, who grew up about half an hour from Cincinnati, is the 57th player to appear in a game for the Reds this season, tying the team record set in 2003. He appeared in 13 games for Toronto from 2019-21.

Joey Votto had an RBI double for Cincinnati in the fourth and scored on a sacrifice fly by Jake Fraley.

"We really ran into a good team - a really hot team as well," manager David Bell said after the Reds lost a series for the first time since the All-Star Break.

IF YOU BUILD IT, THEY WILL PLAY

With the Reds set to face the Chicago Cubs in Thursday's "Field of Dreams" game in Dyersville, Iowa, manager David Bell rewatched the 1989 movie the field was built for. He said his favorite part was the sparseness of the game between the ghostly legends.

"It's kind of like the modern-day version of it where it's just about the game," Bell said. "That's kind of the goal as a player, to go out there and imagine that it's just you and the ball and your teammates and kind of trying to win a baseball game and there's nothing going on around you. I wonder if it'll feel like that a little bit."

The Mets held their first Women's Day at Citi Field. The club honored Shannon Dalton Forde, who was a public-relations executive with the team from 1994 until her death from breast cancer in 2016, with a pregame video tribute.

Mets players walked to the plate to songs by female artists, including Alanis Morrissette's "You Oughta Know" for Mark Canha, the Spice Girls' "Wannabe" for James McCann, Shania Twain's "Man! I Feel Like A Woman!" for Brandon Nimmo and Kelis' "Milkshake" for Vogelbach.

Mets: RF Starling Marte got the day off after starting each of the first 17 games following the All-Star Break.

Mets: RHP Max Scherzer (8-2, 1.98) will start the opener of a three-game series against visiting Philadelphia on Friday.