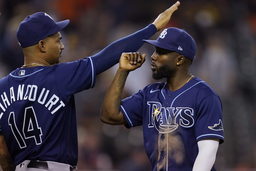 DETROIT (AP) Brandon Lowe hit a go-ahead, two-run double in the eighth inning for the Tampa Bay Rays, who walked a franchise-record 13 times while rallying to beat the Detroit Tigers 5-3 on Friday night.

"How many?" asked a surprised Taylor Walls, who drew three of the walks from the ninth spot in the batting order. "I knew we had a bunch, but I didn't realize we had 13. That's obviously a great night from our whole lineup."

Three of the walks came in Tampa Bay's three-run eighth. The Rays trailed 3-0 after two innings before coming back to win their third straight game.

"We left a lot of runners on base early in the game, but we came through clutch in the times when we really needed it," said Walls, who scored twice. "When we have that much traffic on the bases, and we're putting the barrel on balls, we know we're going to get something."

"I'm so pleased with how the guys laid off so many close pitches, and it was just as satisfying to see Brandon come through with yet another big hit," Rays manager Kevin Cash said.

The Tigers led 3-2 going into the eighth before Joe Jimenez (3-1) walked the first two batters -Tampa Bay's 11th and 12th walks - and Lowe followed with a two-run double. Isaac Paredes, traded from Detroit to the Rays in the spring, made it 5-3 with an RBI single.

"I really don't even know how to describe this one," Tigers manager A.J. Hinch said. "We had a hard time right from the get-go, and the game isn't going to let you give away that many free at-bats without it catching up to you.

"It was a bad night on the mound."

Jalen Beeks (2-1) picked up the win with a scoreless seventh.

The Tigers brought the winning run to the plate in the ninth before Colin Poche struck out Riley Greene for his seventh save.

"I dug myself into a bit of hole there by walking a guy, and then (Eric) Haase fouled off a lot of good pitches before hitting one we couldn't get to," Poche said. "But I was getting my command back, and when I've got a lefty in the box against me, I'm feeling pretty good."

"They got the early runs, but they weren't hitting bad pitches," he said. "Greene hit a good pitch out of the park. You can't let that change what you need to do."

"When Bryan got away with that, we were feeling pretty good about the situation," Hinch said. "We still had the lead in the eighth inning with Joe Jimenez on the mound, so that's definitely a winnable game that we let get away."

Jeimer Candelario's RBI single gave the Tigers a 1-0 lead in the first and Garcia somehow escaped the first two innings without allowing a run. He walked two in the first, but the Tigers turned a double play.

The Rays wasted a much bigger opportunity in the second. Luke Raley led off with a drive down the right-field line that first base umpire Dan Iassogna ruled a home run. He was quickly overruled by home-plate umpire Scott Barry and Raley struck out on the next pitch.

Randy Arozarena singled but was thrown out stealing before Garcia walked the next three batters to load the bases. He fell behind 2-0 to Lowe, but Lowe swung at the next two pitches before popping out to end the inning.

Greene then hit his third career home run to put the Tigers ahead 3-0. Detroit, though, only managed two more hits.

Tampa Bay got on the board on David Peralta's RBI double in the fifth. Reliever Will Vest walked Railey to load the bases - Vest's third walk of the inning and Detroit's ninth of the game. Arozarena grounded out to end the inning, giving the Rays eight runners left on base in five innings.

Lowe's RBI single made it 3-2 in the sixth, but the Rays stranded two more runners.

"There was a lot of confidence all night in our dugout, because we were so close so many times," Cash said.

Detroit optioned Garcia to Triple-A Toledo after the game and will announce a corresponding move Saturday.

Garcia is the first Tigers starter to walk six batters in a scoreless start lasting four or fewer innings since Tommy Bridges did it in a 4-2 win against the Philadelphia A's on July 28, 1932.

Only two other pitchers have done it in the 21st century, one at Comerica Park. Shohei Ohtani of the Los Angeles Angels did it on April 20, 2021, walking six and striking out seven in a 6-2 win against the Texas Rangers, and Sean Gallagher did it for the Cincinnati Reds on Sept. 10, 2008 against the Tigers.

The Tigers will Lou Whitaker's No. 1 jersey before Saturday's game, placing it on the wall next to the No. 3 of long-time double play partner and Hall of Famer Alan Trammell.