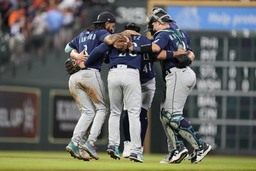 HOUSTON (AP) Abraham Toro pinch-hit for injured All-Star Julio Rodriguez and delivered a two-run single with two outs in the ninth inning as the Seattle Mariners rallied past the AL-West leading Houston Astros 5-4 on Saturday night.

Rodriguez was hit on the back of the hand as he swung at a pitch in the top of the eighth inning. He struck out, but played in the field in the bottom half of the inning before being lifted in the ninth.

"He did not feel comfortable with a bat in his hand," Servais said. "So, we'll pray that it is not broke."

The Mariners beat Houston for the first time since June 8, snapping a five-game losing streak to the Astros.

Ryan Pressly (3-3) entered the ninth inning having converted 21 of his 24 save opportunities this season. Pressly gave up two runs on two hits, walked one and struck out two in the loss in his first blown save since June 23, which came against the New York Yankees.

"He's somebody that is generally aggressive, so I know he likes to attack the zone," Toro, who played parts of three seasons with Houston, said of Pressly. "I was already swinging from the get-go."

Astros manager Dusty Baker added: "He has been a thorn in our side since we traded him over there. It was a big hit that he got tonight."

Erik Swanson (2-0) pitched a scoreless eighth inning and earned the win, and Paul Sewald recorded his 13th save in 16 attempts.

"We've had some crazy come-from-behind wins, crazy games since I've been here," Servais said. "This one may be near the top of the list with all the stuff that happened and where we're at."

Seattle starter Chris Flexen set down eight straight batters at one point, but didn't figure in the decision. Flexen allowed two runs on three hits with four walks and a strikeout in 5 1/3 innings. It was his third no-decision in his last eight starts.

Aledmys Diaz led off the fifth with a solo homer to left field. Diaz has hit three home runs in the last two games and nine for the season. Diaz finished 3 for 3 with two RBIs.

Trailing 3-2 in the seventh, Houston rallied with back-to-back doubles by Martin Maldonado and Jose Altuve and a single from Yuli Gurriel for a 4-3 lead.

Seattle pushed across three runs on singles from Eugenio Suarez and Adam Frazier, and a fielder's choice by J.P. Crawford in the first as Valdez hit two batters in the frame.

Valdez settled in after the first and allowed three runs on five hits, walking one and striking out seven in seven innings. It marks his majors-leading 18th quality start and his 17th straight, the second-longest streak in Astros history.

"It was big for me being able to bounce back from something like that," Valdez said. "Just showing the intensity and the focus that I can have after having a rough inning being able to pitch the rest of the game."

Seattle's Sam Haggerty was hit in the forehead by his thrown helmet after he failed to bunt in the ninth inning and tossed his gear in frustration. The helmet bounced back up and hit him in the head.

Mariners: LHP Tommy Milone was placed on the 15-day injured list on Saturday with a cervical muscle strain. As a result, LHP Brennan Bernardino was selected from Triple-A Tacoma and OF Marcus Wilson was designated for assignment. . OF Dylan Moore left Saturday's game with back spasms.

Mariners: George Kirby (2-3, 3.50 ERA) is set to make his first start against the Astros on Sunday to close out the four-game series. Last time out, Kirby got a no-decision against Texas, giving up no runs on two hits and striking out four in five innings.

Astros: Jake Odorizzi (4-3, 4.25 ERA) is slated to start Sunday, looking to get back on the winning side. Odorizzi's last win came on July 10, at Oakland. Last time out, Odorizzi was tagged for six runs on seven hits in a loss to the Athletics.