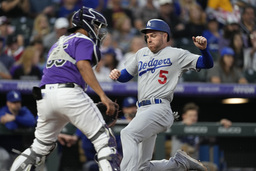 DENVER (AP) Tyler Anderson and two relievers - including infielder Hanser Alberto - combined on a seven-hitter, and the Los Angeles Dodgers used another quick start to rout the sloppy Colorado Rockies 13-0 on Thursday night.

Trea Turner had three hits for Los Angeles, including a three-run double. Gavin Lux also had three hits, and Will Smith finished with two hits and three RBIs.

A day after racing to a 6-0 first-inning lead against Washington while snapping a two-game skid, the MLB-leading Dodgers scored two runs in the first and four in the second against Jose Urena (1-3). LA's 10th win in 12 games extended its NL West lead to a season-high 12 games over San Diego.

Anderson (11-1) allowed four hits and struck out four against his former team, the only club he has lost to this season. About the only trouble the All-Star had in lowering his ERA to 2.61 was when plate umpire Andy Fletcher forced him to wipe a light-colored substance off the bill of his cap before he threw a pitch.

"I usually wipe my hand with rosin and then I'll either wipe it on my pants or hat afterward, so there's some residue," Anderson said. "People have asked about it before, but it's just rosin. He just said to wipe it off. No big deal."

Jake Reed pitched the eighth and Alberto, making his third pitching appearance of the season, worked around two hits in the ninth in the opener of a four-game series. It was Los Angeles' seventh shutout of the season.

"He works fast and throws strikes," a smiling Lux said of Alberto.

First baseman Connor Joe's throwing error on a potential double-play grounder in the second extended the inning for Turner, who sent a bases-clearing liner down the left-field line to give him 72 RBIs.

Urena's wild pitch scored another run and he made a throwing error in LA's five-run fourth. Turner singled in the big inning and made a nifty slide at home to avoid the tag on Smith's two-run single for his 59th run.

"Since the middle of May, he's really amplified his level of play on both sides of the baseball," Dodgers manager Dave Roberts said of Turner. "He's a hit collector, loves to play. On the margins, he's become an even better player than he already was."

Smith added an RBI double and Cody Bellinger and Freeman each had two-run doubles for the Dodgers, who have beaten last-place Colorado five straight times after a 1-4 start.

Urena got nine outs and was charged with 10 runs - seven earned - and eight hits in the Rockies' sixth loss in eight games.

"Behind in the count. Not too many first-pitch strikes" Rockies manager Bud Black said. "Battling 2-1, 3-1 counts a lot, and against this lineup that's tough."

Dodgers: 3B Justin Turner didn't play, a day after his return from an abdominal injury. "I wanted to slow-play him back into the lineup, so we don't give him consecutive days," Roberts said. ... Edwin Rios (hamstring) was hit by a pitch, walked and struck out while playing five innings at third for Triple-A Oklahoma City. ... RHP Dustin May (elbow) allowed two hits and struck out six with no walks in three scoreless innings for Oklahoma City. ... RHP Blake Treinen (shoulder) will throw live batting practice Friday in LA to several hitters, including OF Chris Taylor (foot). ... RHP Walker Buehler (elbow) has started playing catch.

Rockies: RHP Antonio Senzatela's left shin swelling had subsided a day after being hit by a comebacker. Senzatela played catch and said he should make his next start. ... Joe returned after a three-game absence he said was due to back and neck stiffness. ... LF Kris Bryant (plantar fasciitis) doubled and made a sliding catch in his first game in the field since Sunday. "This is something he has to manage," Black said. "But he feels very capable of playing defense." ... OF Charlie Blackmon was out of the lineup to rest.

Closer Daniel Bard confirmed there has been informal discussion with Colorado about a contract extension.

"I just know there's been some interest," Bard said.

The impending free agent has been mentioned as a trade candidate ahead of Tuesday's deadline.