Bregman homers, has 3 RBIs to lead Astros over Mariners 4-2 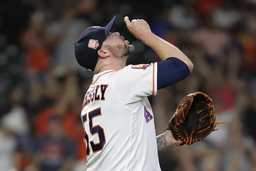 HOUSTON (AP) After suffering their first series sweep of the season by Oakland, the Houston Astros were determined to get back on track against the Seattle Mariners.

Alex Bregman's big night ensured that they did.

Bregman hit a two-run homer early, and his tiebreaking RBI double in the eighth inning led the Astros over the Seattle Mariners 4-2 on Thursday night.

"It feels great," Bregman said. "A tough time over there (in Oakland), but I think this team does a good job of turning the page, and it was an example of that tonight."

Bregman was shaken up in a collision while scoring the Astros' final run in the eighth, but he remained in the game. He said afterward that he was fine and would be in the lineup Friday night.

His big performance came after manager Dusty Baker gave him a day off to rest Wednesday.

"Sometimes you give guys a day off and they come back mentally and physically refreshed," Baker said. "It worked today. He was fresh, and we needed that from him."

The game was tied at 2 when Andres Munoz (1-4) hit Yuli Gurriel between the chest and shoulder with a 100 mph fastball to start Houston's eighth. The impact caused Gurriel to stagger backward and his batting helmet to fly off, but he seemed OK and trotted to first base.

Gurriel stole second base with one out and Bregman, who homered in the first, doubled off the wall in left-center field for a 3-2 lead.

Bregman scored on a two-out wild pitch, colliding with a diving Munoz as the reliever tried to make the tag.

Bregman stood up after the slide but immediately crumpled to the ground on his hands and knees. When Bregman got up again, he didn't put any weight on his left leg, but he limped off as he talked to Baker and went to third base for the ninth.

Rafael Montero (4-1) got four outs without allowing a hit for the win and Ryan Pressly pitched a scoreless ninth for his 21st save in 24 chances.

Pressly had retired 32 consecutive batters, tying Justin Verlander for most in team history, when J.P. Crawford singled with two outs in the ninth. Pressly struck out Cal Raleigh to end it.

Ty France and Carlos Santana had an RBI each for the Mariners, who were coming off a sweep of the Rangers that came after they were swept by the Astros in their previous series.

"Just another tight game with the Astros," manager Scott Servais said. "The last four we've played have been very, very close. Unfortunately we haven't been able to do a whole lot offensively, but we had a few chances there. It was a tight game and a very well-pitched game."

There were two outs in the first when Yordan Alvarez doubled to right field. Bregman then knocked his 13th homer into the seats in left to make it 2-0.

Adam Frazier singled to start the third before Urquidy walked Dylan Moore and Julio Rodriguez to load the bases. The Mariners got within 1 when Frazier scored on a sacrifice fly by France.

Seattle tied it when Moore scored on a groundout by Santana. Urquidy then retired Eugenio Suarez to limit the damage.

Raleigh doubled to the corner of right field with one out in the seventh inning. There were two outs in the inning when Urquidy was replaced by Montero, and he retired Adam Frazier to end the threat.

Mariners: RHP Diego Castillo was placed on the 15-day injured list, retroactive to Tuesday, with right shoulder inflammation. RHP Matt Brash was recalled from Triple-A Tacoma to take his spot on the roster.

Astros: RHP Lance McCullers Jr. (forearm strain) made his second rehabilitation for Triple-A Sugar Lane Wednesday. He allowed three hits and two runs in three innings. The Astros have yet to announce what the next step is for McCullers, who has been out all season with the injury.

Pressly on matching Verlander's record for consecutive batters retired: "Whenever you have your name next to his, you're probably doing something good. So it's an honor to be next to him. I just was trying to put zeros together and you look up and when you have that many strung together it's nice."