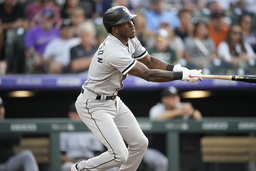 All-Star closer Liam Hendriks worked a rocky ninth for his 19th save, surrendering Ryan McMahon's leadoff homer. Pinch-hitter Elias Diaz walked with two out, but Hendriks got Charlie Blackmon to bounce to shortstop.

Hendriks has allowed at least one run in each of his last three outings.

Colorado wasted a stellar performance by German Marquez (6-8), who permitted one run and seven hits in six innings. The right-hander has allowed five earned runs over his last 19 2/3 innings.

Kopech (4-6) worked out of jams in the second and fifth and departed after allowing six hits in 5 1/3 innings. Jimmy Lambert got two outs, and Joe Kelly worked the seventh. Kendall Graveman pitched the eighth before Hendriks came in.

Chicago jumped in front in the fourth. With runners on first and third, Eloy Jimenez scored on an error by shortstop Garrett Hampson on a potential double-play ball by AJ Pollock.

Rockies: SS Jose Iglesias was out of the lineup a day after fouling a ball off of his left foot. Manager Bud Black said Iglesias should return Wednesday. ... RHP Jhoulys Chacin was placed on the 15-day injured list with toe sesamoiditis. RHP Justin Lawrence was recalled from Triple-A Albuquerque.