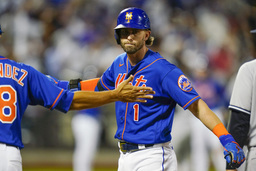 NEW YORK (AP) Eduardo Escobar crossed the plate and skipped joyfully back to the Mets dugout after his tiebreaking, two-run homer capped a four-run, first-inning rally - a drive a fan behind the left field fence caught one-handed with a leap.

Most of Citi Field was dancing by the time Edwin Diaz struck out Gleyber Torres with two on, ending the Mets' 6-3 win over the Yankees in Tuesday night's rare Subway Series matchup of first-place teams.

"It was honestly like a World Series home run," Escobar said through a translator. "I've never played in an environment like that."

Aaron Judge and Anthony Rizzo quieted many of the 42,364 fans with opposite-field home runs on consecutive first-inning pitches from Taijuan Walker (8-2).

But the Mets stormed right back in the bottom half when Starling Marte homered with one out against Jordan Montgomery (3-3). Francisco Lindor and Pete Alonso followed with back-to-back doubles, and Escobar's two-run, two-out homer put the Mets ahead 4-2. The ball was caught barehanded by a fan in a Mets jersey and Yankees hat.

The Mets held on for a victory before just their third home sellout this year, what they hoped is a World Series rehearsal. Both teams had been in first place when they met in only one previous season, a three-game series from April 24-26, 2015, according to the Elias Sports Bureau.

"If we're playing against each other in November, that would be awesome," Alonso said before the game. "If that happens, the city will just be on fire."

Two of baseball's big boppers went head to head. Judge's major league-high 38th home run gave him 82 RBIs, tying for the big league lead. Alonso surged back ahead with his 83rd in the bottom half and went 3 for 3 with a walk.

The Yankees arrived a big league-best 66-31 with a 12 1/2-game AL East lead. The Mets had the second-best National League mark at 59-37 and a two-game NL East edge over Atlanta.

"It was electric," Walker said.

Montgomery, 0-2 in his last seven starts, allowed five runs - four earned - and five hits. He needed 71 pitches for seven outs, and when Boone came to the mound to remove him, he stared at his manager and said: "Why?"

"I wanted to be out there," Montgomery said. "Obviously, I needed to be pulled."

The Yankees went 0 for 6 with runners in scoring position and hurt themselves when Isiah Kiner-Falefa was picked off in the third and Rizzo was caught at second on an attempted double steal in the seventh.

After former Met and Yankee Darryl Strawberry threw out a ceremonial first pitch, Judge and Rizzo combined for the Yankees' 14th back-to-back homers. They tied the team record set in 2009, and Rizzo ended a 14-game homerless streak with his 23rd this season.

The Mets opened a 5-2 lead in the third when third baseman Josh Donaldson hit Lindor with a throw near first base, and the ball caromed into right field as Marte scored from second.

DJ LeMahieu had an RBI grounder in the fourth, when Rizzo stranded the bases loaded with a flyout to to Brandon Nimmo a step in front of the center-field wall.

Jeff McNeil ended an 0-for-19 rut with a run-scoring single off Albert Abreu in the eighth.

After Adam Ottavino got five outs, Diaz set off the crowd with his entrance music of Blasterjaxx & Timmy Trumpet's "Narco" - Mr. Met played a trumpet and many fans mimicked a horn with their water bottles.

Diaz struck out out pinch-hitter Joey Gallo to strand a runner in the eighth, then fanned LeMahieu, Rizzo and Torres around a hit and an error in the ninth, getting his 22nd save in 25 chances.

"I've never played in a major league playoff game before, but if I had to guess, that's what it would be like," Alonso said. "Looking to change that this year."

Mets manager Buck Showalter on the 3-hour, 27-minute game: "That's pretty good for us - 4 is the old 3." ... When asked whether he would have let Ottavino face Kiner-Falefa if Gallo had not pitch hit, Showalter wondered whether he had to answer and was reminded that reporters don't have subpoena power. "In today's world, that doesn't mean you tell the truth, anymore - sometimes." Showalter said.

Wearing an ESPN microphone during Sunday night's game, Mets outfielder Mark Canha said his last name probably should be pronounced "Khan-ya" since it is of Portuguese origin. Not so, said his wife, Marci.

"Don't get me wrong, if we moved to Lisbon tomorrow, then yes, we would pronounce it the way 'NH' is properly pronounced in Portuguese," she tweeted. "Until then, it rhymes with banana."

Yankees: OF/DH Giancarlo Stanton was put on the 10-day IL because of left Achilles tendinitis, a move retroactive to Sunday.

RHP Domingo German (0-1, 15.00 ERA) starts for the Yankees after allowing five runs over three innings at Houston in his season debut. RHP Max Scherzer (6-2, 2.28) is 1-1 with a 1.78 ERA since returning from a strained oblique muscle in his left side.