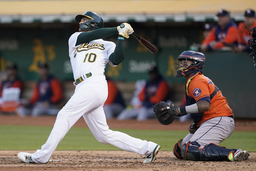 OAKLAND, Calif. (AP) Chad Pinder hit his second grand slam in two weeks, Frankie Montas pitched five innings in what could be his final outing with Oakland and the Athletics held off the Houston Astros 5-3 on Tuesday night.

Tony Kemp had an RBI double and Stephen Piscotty doubled twice for the A's. Oakland has won five of six.

Manager Mark Kotsay's club still has the worst record in the American League but the vibe around the team is noticeably different.

"In the clubhouse you can tell the energy's better," Pinder said. "The (All-Star) break was good for us, especially with such a young team. To see everybody turn the page, it's rewarding."

The A's were out-hit 7-6 and committed an error that led to an unearned run but beat the major leagues' best road team for the second night in a row before another small crowd of 5,130.

Montas (4-9) allowed three runs, two earned, and worked around three walks to win for the first time since June 11. The A's right-hander has been the subject of trade rumors and his next scheduled start is on Aug. 2, the final day of the trade deadline.

He threw 78 pitches and struck out four in his second outing since missing time with inflammation in his pitching shoulder.

"I ain't going to lie, I've been thinking about it especially with the deadline coming up pretty soon," Montas said about the rumors. "It was a time today where I thought, `Hey this might be my last start here' but I'm not trying to think about that. I'm here right now. Until whatever happens I'm still an Oakland A."

Montas hasn't received much run support this season and Oakland's offense was stifled against Houston until loading the bases in the third on an infield single and back-to-back, two-out walks by Luis Garcia (8-6).

Pinder crushed a 1-2 pitch into the left field stands for a 4-0 lead. Pinder also hit a grand slam July 12 against the Rangers.

"Chad's been a big part of this organization. He's grown up here and I've grown up with him," Kotsay said. "He's got almost as many grand slams as I did homers in my career."

"Just happy that I'm swinging the bat well right now," Pinder said. "Happy that we're winning, happy that things are kind of falling together for this team."

The A's bullpen made it hold up with four no-hit innings. Lou Trivino pitched the ninth for his 10th save.

Houston got within 4-3 in the fifth on Alvarez's RBI double and a throwing error by third baseman Vimael Machin. The Astros had two on with two out later in the inning before Montas got Aledmys Diaz to fly out.

"Frankie's been through a little bit of personal off-the-field things that have kind of weighed on him a little bit," Kotsay said. "For him to go out and compete, perform, give us what all he had tonight . he really pitched a great game and gave us a chance to win."

Garcia had seven strikeouts in 5 2/3 innings but walked four and allowed four runs. Runner-up in AL Rookie of the Year voting a year ago, Garcia had won his last five decisions dating to June 10.

The A's added insurance in the eighth following back-to-back doubles by Piscotty and Kemp off Hector Neris.

Astros: 2B Jose Altuve and 1B Yuli Gurriel were held out of the starting lineup but both appeared as pinch-hitters in the ninth.

Athletics: Machin was hit by a pitch in his right elbow but stayed in the game.

Astros RHP Cristian Javier (6-5, 3.13 ERA) faces Oakland for the second time this season after lasting four innings against the A's on May 31. LHP Cole Irvin (4-7, 3.08) pitches for Oakland and has defeated Houston once in seven career starts.