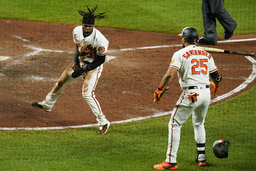 BALTIMORE (AP) The bullpen has been perhaps the biggest part of Baltimore's climb this season.

"Tonight, they were so good," Hyde said. "They put six zeros up. It's absolutely outstanding."

Ryan Mountcastle hit a tiebreaking, two-run single in a four-run fifth that sent the Orioles to a 5-1 victory over the Rays on Monday night. Voth and five Baltimore relievers kept Tampa Bay's offense from delivering the big hit. The Rays left 10 men on base, including six in the first three innings.

"Early on, we got some guys on base, and when you do that, you've got to find ways to make contact, get the ball to the outfield, score some runs," manager Kevin Cash said. "We did not, and then their bullpen kind of got on a run where there wasn't many opportunities after the first couple innings."

Brandon Lowe homered leading off the third for Tampa Bay, but Corey Kluber (6-6) allowed four earned runs in five innings. Nick Vespi (3-0) struck out four in 1 2/3 innings of relief to earn the win. Vespi was recalled from Triple-A Norfolk before the game.

"That was awesome," Hyde said. "Just gets here today, bridges the gap to some back-end bullpen guys there."

Ryan McKenna led off the Baltimore fifth with a single, and Cedric Mullins added a bunt single one out later. Adley Rutschman was hit by a pitch, loading the bases, and Mountcastle's hit put the Orioles up 3-1.

Anthony Santander followed with a grounder to first, and Ji-Man Choi's throw to second hit Mountcastle. A run came home on that play, and Austin Hays made it 5-1 with a sacrifice fly.

Voth pitched around leadoff walks in the first and second. The Rays had the bases loaded with one out in the second, but Voth was able to throw home for a force on a comebacker by Brett Phillips, and Yandy Diaz hit a flyball to end the threat.

"I felt like I battled today," Voth said. "Just didn't have my best stuff. I was behind in a lot of counts. That's kind of what really hurt me, but definitely found a way to get out of some of those innings."

Rutschman, the Baltimore rookie catcher, was taken down by a sliding Luke Raley on the force play at the plate. That drew the ire of the crowd, but Hyde said afterward he thought it was a clean play by the Tampa Bay runner.

The Orioles loaded the bases in the second with nobody out. Rougned Odor hit a sacrifice fly, but the next two batters were retired on foul pops.

The Orioles are 13-6 in July, assuring them a second consecutive winning month. Prior to this June, when they went 14-12, they hadn't had a winning month since August 2017.

Choi was charged with an error on his poor throw in the fifth, snapping a 10-game errorless streak for the Rays. That tied a club record last reached in 2011.

"I'm not assuming that we're going to get a double play, but an out would have been really beneficial in that situation," Cash said.

Tampa Bay went 18-1 against the Orioles in 2021, but Baltimore has won six of 13 meetings this year.

Rays: Tampa Bay has ruled OF Kevin Kiermaier (left hip) and C Mike Zunino (left shoulder) out for the season.

Orioles: SS Jonathan Arauz jammed a finger sliding into second in the eighth. ... 1B Trey Mancini, the subject of trade speculation, was given the night off. He's in an 0-for-22 slump.