Dodgers rally for 7-4 win over Giants, sweep 4 from rivals 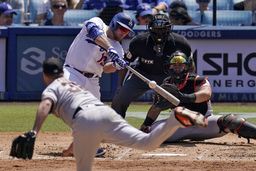 LOS ANGELES (AP) Even on the rare occasions this season when Clayton Kershaw isn't at his best, the Los Angeles Dodgers don't worry much.

They simply score more runs, pick him up in relief - and keep adding victories to a summer that's going superbly.

Trayce Thompson drove in two runs and thrilled his older brother, Klay, with an RBI double during the decisive rally in the seventh while the Dodgers surged past the Giants 7-4 Sunday for their season-high eighth consecutive victory.

Unlikely cleanup hitter Jake Lamb delivered a tiebreaking RBI double during that three-run rally by the NL-leading Dodgers, who have won 15 of 16, 19 of 21 and 24 of 29. Los Angeles swept a four-game series with the Giants at Chavez Ravine for the first time since 1995 and only the third time in their long history.

"Certainly, we're hot," Dodgers manager Dave Roberts said. "I think that to win that many games speaks to that. But this is who we are when we play this type of baseball."

After Lux's RBI single drove in Lamb in the seventh, Trayce Thompson's drive to the right-center gap scored Max Muncy and pumped up Klay Thompson, the Golden State Warriors star, in his seat right behind the Giants' dugout.

Freddie Freeman, Lux and Thompson had early RBI singles for LA, and Muncy added a run-scoring double. Evan Phillips (5-3) pitched the seventh for the Dodgers, who got 4 2/3 innings of scoreless, two-hit relief culminating in Craig Kimbrel's 17th save.

"We played great today, our whole team," said Kershaw, who yielded four runs and failed to get through the fifth inning. "Bullpen did great. Didn't give up any runs at all for that whole time. Offense did unbelievable today, really the whole series. Just (a) really great team win by everybody except me."

Six weeks after the Giants swept a three-game series with the Dodgers in San Francisco and pulled within 3 1/2 games of LA atop the NL West, this sweep punctuated LA's 27-7 surge since then.

Darin Ruf hit a tying two-run homer in the fifth and Thairo Estrada had a two-run single for the Giants, who got swept at Chavez Ravine by a combined 25-13 after going into the break with seven wins in nine games.

"Not good enough," manager Gabe Kapler said. "Really frustrating. Just a level of play that's just not going to be good enough for us. There's no other way to classify it except as not good enough."

Alex Cobb yielded eight hits and four runs while pitching into the sixth for San Francisco. He is winless in nine starts since May 17.

"Probably as frustrating as it gets," Cobb said. "Felt like we had a little momentum going into the break, and then we came out here and I feel like we were competitive in all the games, but we didn't get it done."

Journeyman backup Lamb doubled twice while batting cleanup for LA for the first time, and he came through against Tyler Rogers in the seventh.

After Freeman got a one-out double off Dominic Leone (3-3) when Yermin Mercedes couldn't make a tough catch on a tailing fly ball, Lamb's drive to right bounced into the short porch. Lux and Thompson followed with run-scoring hits.

Kershaw allowed five hits in his first appearance since throwing a scoreless inning in his first career All-Star Game start at home last Tuesday. The nine-time All-Star selection took a perfect game into the eighth inning of his previous start in Anaheim last weekend, but Ruf's two-run shot chased him after 94 pitches and six strikeouts.

Klay Thompson cheered wildly for his brother and the Dodgers throughout the game despite his proximity to his fellow Bay Area pro athletes. The four-time NBA champion also chugged a beer for his Instagram followers during the sixth inning. The sons of Lakers broadcaster Mychal Thompson grew up in Orange County.

Giants: OF Mike Yastrzemski was held out with tightness in his left calf, Kapler said after the game. ... 3B Evan Longoria went on the injured list for the third time this season. The 36-year-old veteran strained his right hamstring while running out a grounder Saturday.

Dodgers: Andrew Heaney is likely to return to the rotation Wednesday against Washington, Roberts said. The left-hander has appeared in only three games - just one since April 17 - due to shoulder woes.

Giants: Jakob Junis (4-1, 3.06 ERA) takes the mound in Arizona on Monday to open a three-game series.

Dodgers: Tony Gonsolin (11-0, 2.02) returns from his All-Star Game loss Monday to open a three-game series against the Nationals and All-Star outfielder Juan Soto, who was serenaded with chants of "Future Dodger!" during the Midsummer Classic.