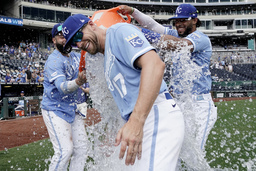 Dozier snapped a 2-all tie with two outs in the seventh when he singled off Brooks Raley (1-1) to score Whit Merrifield. Melendez added an insurance run with a double down the left-field line in the eighth.

The Royals overcame the loss of Bobby Witt Jr. for their first series win against the Rays since 2017. They broke an 11-series losing streak to the American League East.

"Just a great series. That is a good team and to walk out with a series win is a big deal for us," Royals manager Mike Matheny said. "We had so many guys on base and we had a lot of missed opportunities today and those are ones that usually slip away, but our guys just kept with it and got some big hits late."

Bubic (2-6) tied with a season high by pitching seven innings. He gave up two runs on four hits, walked three and struck out four.

"Solid outing, to be able to pitch deep into a game like that in back-to-back outings is nice," Bubic said. "It's good to give the bullpen a little break and the defense picked me up in some crucial situations. All around every facet was good today."

For the second straight game, the Royals lost a lead but found some timely hits late to prevail.

Witt hit an RBI single in the first inning, but exited the game before the next half-inning even started. The 22-year-old rookie stole second but then gingerly ran to third on a fly ball to center field and was removed with right hamstring tightness. He is considered day to day.

"They told me as of now it's just sore, tight hamstrings," Witt said. "Hopefully I will be back in there soon."

Nick Pratto made it 2-0 in the second with a sacrifice fly to center field that scored Michael A. Taylor.

Tampa Bay responded, as Yandy Diaz hit a 434-foot homer to center field for his first since May 14. The Rays tied the game in the sixth on a sac fly by Luke Raley.

"I was very happy I was able to hit that home run," Diaz said. "I wasn't looking for it, it is not what I go for, but I was happy it happened."

Taylor Clarke got his second save of the season.