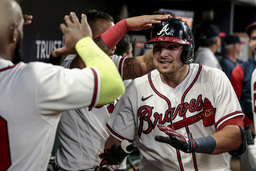 ATLANTA (AP) Austin Riley had a homer and two singles, Kyle Wright won his 12th game to take the NL lead, and the Atlanta Braves kept rolling with a 7-2 victory over the Los Angeles Angels on Saturday night.

Riley singled in the first, singled and scored in the third and hit a two-run homer in the fourth off Austin Warren to make it 7-1. Riley, an NL All-Star reserve earlier this week, has a 15-game hitting streak and is batting .439 over his last 20 games.

The defending World Series champion Braves, who moved one-half game behind the New York Mets for the lead in the NL East, are 35-11 since June 1 - the best record in the majors over that span. They are 19-6 at home during the stretch and have outscored opponents 131-78 in those 25 games.

"I think that's huge," Riley said. "A lot of games left with those guys obviously and I think it's just one of those things where every game matters and you can build on that confidence. I like the baseball that we're playing right now."

Shohei Ohtani, a two-way All-Star and the 2021 AL MVP, connected with a solo shot off Wright in the fifth, a liner that left his bat at 110 mph, cleared the right-field wall and trimmed the lead to 7-2. The homer was Ohtani's 20th.

Wright (12-4) has won five straight decisions over a six-start stretch and moved one victory shy of Houston's Justin Verlander for the major league lead. Wright gave up two runs and seven hits with no walks and eight strikeouts in six innings.

The All-Star break didn't affect Wright in the least.

"I was a little rusty at first but once I got going I felt like I was back to where I left off," Wright said. "The main thing is just staying within myself and doing what I do well. That's using my sinker and curveball and adjust off that."

Riley's homer was his 28th. Atlanta went deep three times on Friday and has 150 homers, most in the NL.

"It's pretty cool for those of us who've seen him from the get-go, where he was to where he is now and the development, growth, maturity, confidence," Atlanta manager Brian Snitker said of Riley. "What he's doing is pretty special, I think, and he hits all the pitches, too."

Angels starter Patrick Sandoval (3-6) gave up five runs and eight hits in three innings. He dropped to 0-5 with a 4.95 ERA in his last nine starts.

"It's tough," Sandoval said. "You've got to execute. Honestly I'm at a loss for words. Definitely not the way you draw it up and had to grind from there and see how deep I could get."

Atlanta, which improved to 24-9 against left-handed starters, leads the majors with a 43-7 record when scoring first.

The Braves led 2-0 in the first on Dansby Swanson's single and Travis d'Arnaud's RBI force out, and 5-0 in the third on Marcell Ozuna's single and Michael Harris II's two-run single.

Wright stranded a runner at third in the second and runners at first and second in the third before Kurt Suzuki put Los Angeles on the board with an RBI single that made it 5-1 in the fourth.

Angels: Slugger Mike Trout had a cortisone shot in his back on Thursday and is going through his progressions and a core stability program, but head athletic trainer Mike Frostad said the three-time AL MVP will not come off the injured list in the next couple of days. Trout is on the IL with left rib inflammation. He's also had back spasms. ... Los Angeles RHP Michael Lorenzen (shoulder strain) was scratched from his rehab start in Double-A and will restart a throwing program in the next couple of days.

Braves: LF Adam Duvall left the game before the top of the third with left wrist soreness. Guillermo Heredia took his place.

Angels interim manager Phil Nevin was ejected in the top of the fifth by home plate umpire Alan Porter. Coming out of the dugout after Ohtani homered to argue that Riley should've been called out on a check swing one pitch before he homered, Nevin pointed in frustration at first-base umpire John Bacon for not calling Riley out.

"When things are rough like this, little things get at you," Nevin said. "But yeah, the high check swings are ones that aren't missed very often. That's the way I saw it obviously. Followed up by the home run - I know we've got to make a pitch there - but Austin pitched his butt off and was out of that inning. It changes it."

Los Angeles RF Dillon Thomas ran to his right and stretched out to make a diving catch in the third that robbed Heredia of a hit and likely saved a run with a runner at second.

The Braves announced an attendance of 42,827, the fifth-largest crowd since Truist Park opened in 2017 and the 26th sellout of the season.