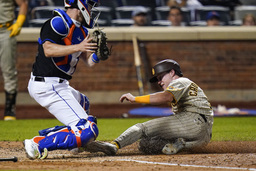 General manager Billy Eppler is trying to do something about that - no matter which opponent is on the mound.

"We beat a guy like that, that can really give you some momentum," Hosmer said. "We did a good job of really just sticking to our approach tonight. We wanted to wait him out a little bit."

Less than an hour before the first pitch, which was delayed 31 minutes because of rain in the area, the NL East-leading Mets announced a trade: They acquired beefy designated hitter Daniel Vogelbach from the Pittsburgh Pirates for rookie reliever Colin Holderman.

Shut down by Darvish, the Mets certainly looked as though they could use more punch. The right-hander topped Scherzer in a matchup of aces and improved to 5-0 with a 2.56 ERA in eight career starts against New York.

"A lot to learn from a pitcher like that," Darvish said through a translator. "You actually go through his videos, watch him pitch. You learn sort of the mental aspect of the game through him. So really I was looking forward to facing him tonight and pitching against him."

Trent Grisham also went deep for the Padres in the opener of a three-game series between NL playoff contenders coming out of the All-Star break.

Darvish (9-4) struck out nine and walked one in seven sparkling innings. He allowed four hits, including a two-out RBI double by Luis Guillorme that spoiled the shutout bid in the seventh.

"It doesn't surprise us. We seem to get spoiled by him every time out," Padres manager Bob Melvin said.

Nick Martinez worked a perfect eighth and Taylor Rogers got three outs for his 27th save in 32 attempts. With two on, Rogers retired Eduardo Escobar and pinch-hitter Mark Canha to finish the four-hitter.

Luke Voit singled to open the fourth against Scherzer (6-2), making his fourth start - first at home - since returning from an oblique injury. Hosmer, who doubled earlier, then drove a 95 mph fastball the other way to left-center for his seventh home run this season and first since June 23.

"I just felt like that was a big blow at that point," Scherzer said. "I got outpitched tonight."

Hosmer is 17 for 55 (.309) against Scherzer with three home runs, tied for his most against any active pitcher.

"Give credit to Darvish tonight. He pitched really well," Scherzer said. "He was having quick innings there in the first part of the game, and kind of a time-of-possession thing where I was grinding through the first three innings (and) he was very efficient. That's usually a tough situation to pitch in. Usually I like being on the other side of that."

Grisham connected leading off the seventh against lefty reliever Joely Rodriguez, and the Padres added another run on a throwing error by catcher Patrick Mazeika.

"We got some guys on in some key situations and capitalized on it," Hosmer said. "When you're facing a guy like Max and it's a matchup of Yu-Max, you know it's going to be one or two swings that kind of take the game each way."

"That was my dad's favorite pitcher. I'm definitely going to give that ball to him," said Scherzer, who was born in St. Louis. "For me as a kid growing up, he was one of my idols. I did book reports on him left and right. So, I know so much of his career and what he meant to the St. Louis Cardinals organization and obviously meant to my dad, and to me. So passing him, that's a huge thing for me personally."

Padres: Star shortstop Fernando Tatis Jr. (broken left wrist) took grounders during batting practice, but the team is still limiting him to soft toss at this stage of his swing progression. ... OF Wil Myers (right knee inflammation) was set to play the first of three more rehab games at Triple-A El Paso before being re-evaluated. ... LHP Drew Pomeranz, recovering from flexor tendon surgery that's sidelined him all season, is scheduled to throw off a mound and maybe even to hitters Saturday.

Mets: RHP Jacob deGrom will make at least one more minor league rehab start next week before rejoining the rotation. The two-time Cy Young Award winner has been sidelined all season by a stress reaction in his right scapula and hasn't pitched in the majors since July 7, 2021. ... RHP Trevor May, out since May 3 because of right triceps inflammation, plans to throw and work out Sunday at Citi Field along with deGrom. May could begin a minor league rehab assignment next week. ... C Tomas Nido (bruised left hand) was pulled for a pinch-hitter in the sixth. X-rays were negative. ... RHP Taijuan Walker had his right knee and right shoulder examined during the All-Star break. Everything checked out fine and he's scheduled to start Tuesday night against the Yankees. ... First base coach Wayne Kirby is away from the team after having prostate surgery during the All-Star break.