Feeble much of night, Braves erupt for 8-1 win over Ohtani 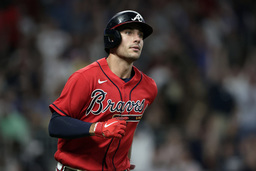 Then, with a stunning outburst, the Atlanta Braves showed why they are the reigning World Series champions and one of the hottest teams in baseball.

Ohtani threw six dominant innings, only to surrender homers to Matt Olson and Orlando Arcia in a seven-run seventh that carried the Braves to an 8-1 victory over the Los Angeles Angels on Friday night.

Atlanta resumed their winning ways following the All-Star break, getting six shutout innings from Charlie Morton and a sudden dose of long ball after being totally overmatched by Ohtani (9-5) the first two times through the batting order.

Mixing all of his pitches to near perfection, the Japanese superstar faced only one batter above the minimum through six frames, surrendering a double to Austin Riley leading off the second. Ohtani struck out 11, marking the fifth straight game in which he's fanned double figures, and only went to three balls on two hitters.

After throwing just 71 pitches - 53 of them for strikes - Ohtani appeared to run out of steam in the seventh.

Dansby Swanson led off with a walk and Ohtani left a splitter up in the zone to Olson, who launched a 355-foot drive into the Chop House restaurant in right for his 18th homer of the season and fifth in the last seven games.

"He's a very talented arm," Olson said. "I was able to get a pitch over the middle."

The Braves were just getting warmed up. Riley, Travis d'Arnaud and Eddie Rosario followed with three straight singles, the last of which drove in another run.

Marcell Ozuna flied out, but Arcia - who came on in the third after starting second baseman Robinson Cano left the game with dizziness - sent a drive into the seats in right-center for a three-run homer that finished off Ohtani.

In his first two at-bats, Arcia struck out twice on seven pitches, making contact on just one of them for a foul ball.

"Nothing but respect for Ohtani," Arcia said through a translator. "He's amazing. But the game is not over until the 27th out."

The six runs matched the most Ohtani has allowed all season and came after he had surrendered just two earned runs over his previous 45 2/3 innings. The Braves snapped Ohtani's six-game winning streak and, with that one big inning, jacked his ERA from 2.23 to 2.80.

Atlanta wound up sending 13 hitters to the plate in the seventh, tacking on the final run via a wild pitch. Ozuna added his 18th homer in the eighth.

Given Ohtani's dominance most of the game, Morton played a supporting role. He sure played it well, giving up only two hits and three walks over six innings.

Jonathan Villar homered off Will Smith in the ninth to break up Atlanta's shutout bid.

The Braves struggled through the first two months of the season but have gone 34-11 since the end of May. They again climbed within 1 1/2 games of the NL East-leading New York Mets, who lost to San Diego 4-1.

Fresh off his hitting-only appearance in the All-Star Game, where he singled and walked in two plate appearances, Ohtani's first career appearance against the Braves drew an overflow crowd of 42,867.

The game began 55 minutes late after a dark, threatening cloud hovered over Truist Park before the first pitch, leading to a precautionary weather delay.

Morton doesn't have the greatest numbers, but he's now pitching like the Braves expected all along.

The 38-year-old right-hander has given up two runs or less in six of his last seven starts. He's still just 5-4 with a 4.20 ERA -- largely because of a brutal start to the season.

Braves manager Brian Snitker said Cano became dizzy and light-headed early in the game, apparently because he was dehydrated. But the veteran infielder was feeling fine after the game and shouldn't miss any time. ... Atlanta RHP Kirby Yates is heading to Double-A Mississippi to continue his rehab assignment from Tommy John surgery after pitching a perfect inning in the Florida Complex League. The Braves are hoping he can add depth to the bullpen down the stretch.