Olson, Riley homer as Braves send Nats to 9th loss in a row 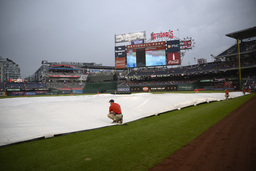 WASHINGTON (AP) Matt Olson and freshly minted All-Star Austin Riley hit consecutive home runs in the third inning, and the Atlanta Braves rolled to a 6-3 victory Saturday night and dealt the Washington Nationals their ninth loss in a row.

Atlanta has won nine consecutive games against Washington and is 10-2 against the Nationals this season. The Braves have also won 14 in a row in Washington dating to last year.

Earlier in the day, Washington outfielder Juan Soto expressed irritation after The Athletic, citing unidentified sources, reported he turned down a $440 million, 15-year contract offer to remain with the Nationals that would have been the most lucrative in baseball history. The 23-year-old is a two-time All-Star who finished second in NL MVP voting last year.

The Braves took the lead in the third against Washington starter Paolo Espino (0-3). With two men on, Olson poked an opposite-field shot just over the fence in left for his 17th homer of the season. Riley, who was selected to his first All-Star team earlier in the day, then blasted his 27th home run to center.

Riley ranks second in the NL in homers, two behind Philadelphia's Kyle Schwarber.

Atlanta starter Max Fried (10-3) earned his 50th career win, allowing three runs in seven innings while striking out four. He and Kyle Wright (11-4) are the first Braves duo with double-digit victories at the All-Star break since Tommy Hanson and Jair Jurrjens in 2011.

"They had some really good at-bats and I would have liked to keep a couple more runs off the board, but the guys did a great job of grinding out at-bats and getting a good lead. So I just had to try to hold it," Fried said.

After a rain delay of 1 hour, 49 minutes, Jesse Chavez worked a 1-2-3 eighth and Kenley Jansen handled the ninth for his 22nd save in 26 attempts.

The Nationals (30-63) have the worst record in the majors, have lost 15 of 16 and are 7-36 against the NL East. The nine-game skid is Washington's longest since dropping 11 consecutive games spanning the 2008 and 2009 seasons and its lengthiest in a single season since a 12-game slide in August 2008.

"It would be nice to come out there tomorrow and get a victory, it really would," Washington manager Dave Martinez said. "What I do know is these guys are going to come out and play hard. Every day, these guys don't let up. They keep going."

Soto extended his on-base streak to a career-high 25 games with a single in the fourth. Josh Bell then tripled Soto in before scoring on Keibert Ruiz's groundout. Bell added an RBI single in the sixth.

Braves: RHP Kirby Yates (Tommy John surgery) struck out two in a perfect inning Saturday for Atlanta's Florida Complex League affiliate in his first appearance at any level since August 2020.

Nationals: DH Nelson Cruz, who left Friday's game with quad tightness after two plate appearances, was out of the lineup. . RHP Tyler Clippard suffered a leg cramp while warming up in the bullpen and ultimately was not used.

Soto, who will not be a free agent until after the 2024 season, was unhappy contract negotiations became public.

"It feels really bad to see stuff going out like that because I'm a guy who, my side keeps everything quiet and try to keep it to them and me," Soto said before the game. "They just make the decision and do what they need to do."

"Excited, that's about as plain and simple as I can put it," Riley said. "It's something you work for and try to accomplish. To be going, I'm super thankful."

Nationals: Washington will opt for a bullpen game Sunday for the finale of the four-game series.