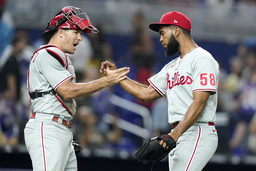 MIAMI (AP) J.T. Realmuto had three hits against his former team, including a tiebreaking double in the seventh inning off All-Star Sandy Alcantara, and the Philadelphia Phillies snapped a four-game skid when they held on to beat the Miami Marlins 2-1 Friday night.

Alcantara extended his shutout string to 25 innings before consecutive run-scoring doubles from Darick Hall and Realmuto gave the Phillies the lead. The right-hander went eight innings and struck out 12.

Philadelphia reliever Seranthony Dominguez walked three batters with one out in the ninth, but pinch-hitter Jesus Sanchez grounded into a fielder's choice that forced pinch-runner Billy Hamilton at home. Dominguez then struck out Miguel Rojas for his fourth save.

"That's how you have to beat (Alcantara)," Phillies interim manager Rob Thomson said. "You've got to scratch out some hits and some runs and play good defense. It's like a playoff game right there."

Kyle Gibson (5-3) pitched six innings of one-run ball for the Phillies. He scattered four hits, walked one and struck out five.

"You understand that these games, if you give up more than three, it makes it tough on the offense," Gibson said. "I try not to think about that because I have to face Sandy, but you're trying to limit the damage and keep away from big numbers."

Alcantara (9-4) limited Philadelphia to one baserunner through the first six innings before Rhys Hoskins reached on a one-out walk in the seventh and Nick Castellanos singled.

Hall's opposite-field double to left scored Hoskins, but Castellanos was thrown out at the plate. Realmuto followed with a hard smash down the third base line.

"We didn't make a ton of good contact tonight," Hoskins said. "We got some hits when we needed it. Got runners on late and didn't miss pitches in the zone then."

Jose Alvarado and Brad Hand each threw a perfect inning of relief for the Phillies.

Alcantara allowed four hits and walked two. He has completed at least seven innings in each of his last 13 outings.

"I was using all my pitches, but when you've got to face the same guys again and again, they know what pitches you want to throw," Alcantara said. "I think that's how they made the adjustments to me."

Phillies slugger Kyle Schwarber, who leads the NL with 28 homers, struck out four times against Alcantara, a candidate to start for the National League in the All-Star Game on Tuesday night at Dodger Stadium.

"If they give me the opportunity, it will be great for me, for my team, for my country," said Alcantara, who is from the Dominican Republic.

Alcantara retired his first 13 batters before Realmuto's one-out single in the fifth.

The Phillies had not drawn a walk in 148 plate appearances until Hoskins reached on four pitches in the seventh. Hoskins also had an eight-pitch at-bat against Alcantara in the fourth before flying out.

"I didn't know it was that long. It felt like it had been a long time," Hoskins said. "Those guys with elite stuff, the aces, you try to grind them a little bit. Get them out of the game early. But he throws so many strikes you found yourself 0-2 on the count a lot."

Phillies: Bohm (dislocated left ring finger) didn't start but was available to pinch hit. ... INF Jean Segura (broken right index finger) is hitting in the cage and taking grounders, but there is no timetable for his return. ... RHP Hans Crouse (right biceps tendinitis) was recalled from Lehigh Valley and placed on the 60-day injured list.

The Phillies had not announced a starter for the second game of the series Saturday. RHP Max Meyer will make his major league debut for the Marlins. The 23-year-old Meyer was the third overall selection in the 2020 draft.