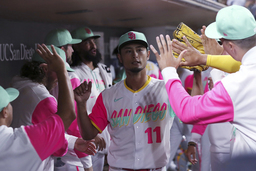 Austin Nola hit an early two-run double to help the Padres win for only the second time in seven games.

Ketel Marte had three hits and scored twice for the Diamondbacks, including a solo homer to center field off Darvish (8-4) in the first inning.

San Diego answered with three runs off Madison Bumgarner (5-9) in the second. Nola drove in two with a double down the left-field line and scored from third on Esteury Ruiz's single two batters later.

The Padres tacked on two more in the third on an RBI single by Ha-Seong Kim and Nola's double-play grounder.

Christian Walker smashed a long two-run homer off Darvish after Marte singled in the fourth, making it 5-3.

Darvish allowed five hits and walked two. Taylor Rogers retired the side in order in the ninth for his 25th save, second-most in the majors.

Diamondbacks: RHP Ian Kennedy (blood clot in right calf) is expected to return right after the All-Star break. A recent ultrasound showed the clot had dissolved, and Kennedy is expected to pitch in an Arizona Complex League game Saturday.

Padres: SS Fernando Tatis Jr. was cleared to begin his swinging progression, and he started it Friday afternoon at Petco Park with light work off a tee, manager Bob Melvin said. However, the Padres have not given a projected return date to game action. Tatis underwent surgery to repair the scaphoid bone in his left wrist on March 16. At the time, the team offered a three-month timetable. ... OF Jurickson Profar and RHP Steven Wilson were activated from the injured list. Profar was back in the leadoff spot after he sustained a concussion and a cervical sprain in a scary collision with infielder C.J. Abrams last week. Wilson rejoined the bullpen after recovering from a left hamstring injury. OF Jose Azocar and RHP Tayler Scott were optioned to Triple-A El Paso.