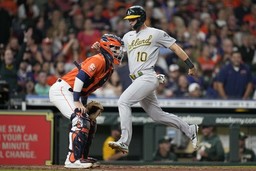 Elvis Andrus hit a two-run single as the A's rallied in the seventh.

Oakland trailed 1-0 when Seth Brown singled to start the inning, Chad Pinder doubled just in front of the bullpen in right-center and Andrus put the A's ahead.

Center fielder Jake Meyers committed an error on the play that allowed Andrus to advance to second base, and he moved to third on a wild pitch by Jose Urquidy (8-4).

Urquidy struck out Tony Kemp before he was replaced by Ryne Stanek. He was greeted with an RBI single by Bolt that pushed the lead to 3-1.

Manager Mark Kotsay was glad to see his team string some hits together after failing to do so early in the game.

"That's kind of what we've been trying to accomplish and it was good to see us get some there in the seventh," he said.

Kemp doubled with two outs in the ninth and Bolt homered off Seth Martinez to make it 5-1. Bolt, who came off the 60-day injured list June 30, had a career-best three hits and his three RBIs were just one shy of his total from last season.

Kotsay has been impressed with Bolt's performance in his limited work this season.

"We've always been really kind of high on Skye in terms of what he's been able to do performance-wise in Triple-A, and I think we're starting to see a little bit of that," he said. "We're starting to see a confidence now that we haven't seen before in some of his call ups. So hopefully this can continue. He has these abilities."

Bolt is happy that his success in the minors is finally translating into results at this level.

"It's just confidence," he said. "It feels good. It's my authentic self. I'm not trying to do too much and just doing what I'm capable of."

Irvin (4-7) yielded three hits, struck out four and walked one.

Urquidy, who pitched a career-high eight innings in a win over Oakland in his last start, allowed six hits and three runs with nine strikeouts in 6 1/3 innings. He had won three straight decisions.

The Astros had trouble getting much going at the plate, finishing with just four hits in a game where they were missing many of their regular starters. Outfielders Yordan Alvarez and Michael Brantley are on the injured list and All-Star second baseman Jose Altuve was also out after being hit by a pitch on the left knee Thursday.

"The guys that were up there were doing the best that they could at that time," Baker said. "We had a rookie lineup in there ... but you don't get any excuse or alibis. They beat us, so we just have to come out tomorrow and hopefully be fresher tomorrow than we were today."

McCormick opened Houston's fifth with a double and advanced to third on a groundout by J.J. Matijevic. The Astros took a 1-0 lead when McCormick scored on a sacrifice fly by Jose Siri.

Vimael Machin hit a leadoff single for the Athletics before Urquidy retired the next 10 batters. Oakland's next baserunner came when Sean Murphy doubled with one out in the fourth, but he was left stranded when Urquidy set down the next two batters.

Urquidy allowed only a single over the next two innings before running into trouble in the seventh.

Athletics: RHP Frankie Montas (right shoulder inflammation) is scheduled to throw a bullpen Saturday and should come off the injured list after the All-Star break. He's been out since leaving his start on July 3 after one inning.